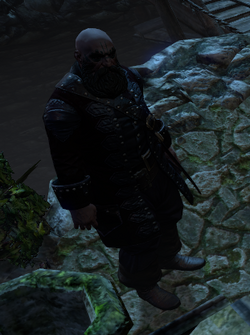 Вейлам Рот - это с второй части сюжетной компании. He is a famous dead pirate, the Grandfather of Lilly Roth. He takes the player's character, to the Brine King's Reef from the Beacon, and he bring the character to the Bridge Encampment. His ship is the Black Crest.

He also appeared at the end of Act 9 in the Rotting Core with Lilly Roth after the player defeats the Depraved Trinity, taking the player to Oriath Docks.

So you're the shite that's gone and summoned me to the beacon, eh? Dammit all... rules is rules and now I'm bound to you, the legendary Weylam Roth, Captain of the Black crest, cursed to be the undead slave of some lowly... outcast, by the looks of it.

You got an arse for a brain in that thick skull of yours? Of course I'll ferry you to the Brine King's blood reef. I be wanting to discharge this accursed duty and get back to me afterlife. It's not right, not natural, being above water without a beating heart in me chest.

So get yourself aboard and be quick about it!

Right, well on with it then. Go find yourself a salty sovereign to dethrone. Fool's errand if you ask me. Old Briney will gut you like a fish, but at least with you dead in the water I'll be free to get on with me own voyage. So off you go, matey.

Lord of Salt and Scale's what we use to call him. They say when the gods got the boot from our lands, that monstrosity went to sleep down in the deep. Dreamed the kinda dreams that cause all sorts of gilled abominations to rise up, to plague and hunt us for what he thinks we must've done to him.

Was a time we got ordered to hunt them things near extinction. Free the trade routes from Old Briney's tyranny. Even so, not a sailor worth his salt who won't sacrifice a lousy deckhand or two by light of the full moon, just to keep that overgrown crab slumbering in the Oriathan trench.

If he's risen again, you bet your bloody arse we're all buggered.

How did you...? You still breathing? Bloody barnacles on me arse! You, my new friend, are a legend of the high seas to behold! Tell you what, I've already done my bit getting you here, but if you're looking to sail on to Phrecia, me and the Black Crest would be honoured to take you.

What’ll do now? This here Broken Bridge speaks to me some. A fair place to rest me old bones for a bit. And tell you what, with all this sunlight and fresh air, I can feel the calling forth of the poetic muse beneath me trousers!

Been a long time since I’ve felt this here compass point in any direction.

It’s a bit of an embarrassing affair, truth be told.

Thought I could return to the golden days, you know? Be a terror of the high seas like in me youth. Problem was, they’d all forgotten me. Those young blighters sailing about, they had no clue who I even were! Figured if I could complete another great feat, like slaying that sea-bitch Merveil, maybe that’d earn me my respect back.

Arr, suppose I don’t need to tell you, that girlie’s stronger than she looks. All it took were one slip of the old hands and next I knew, the Black Crest were wrecked against the coast and I’m getting meself eaten alive by that hag.

Peeled each separate muscle from my bones, she did. I’ll tell you, it weren’t pretty.

Aye, I know Lilly be missing me something great, and it cuts me deep not to go visit the lass. Thing is, I reckon she should remember me as I was, not retch at the sight of this spectre I be now. Let the legend live on in her mind, I say.

Yeena’s a pretty young thing ain’t she. Bosoms to eclipse the sun, she has! Might be that I spend some time here, get to know the lass a tad more. Never mind that she’s young and alive and I be… argh, old and dead. Once she hears me poetry, that is. Not a girlie alive who won’t want for a bit of ol’ rot tooth once he breaks out the… heh, tongue twisters and… word plays!

Not that she’d likely hold much interest in an old ghost like me. Still, a man can dream. Even a dead one.

Arr, that lassie. Pretty on the eyes I reckon, but she’s got her knickers pulled up far too high. Bit uptight if ye ask me.

Eramir? He’s a tad dull, tends to ramble on a bit. Still, he’s a few interesting stories of his own, so might be worth chewing the fat with from time to time.

Legend has it, Kishara got herself in some hot water with a certain Queen Atziri. Details are vague as to exactly how, but by all accounts, Atziri weren’t the most understanding of lasses. Kishara, being the free spirited sort probably just pricked the royal arse with some spiky facts from the outside world. Almost lost her head for her trouble, Kishara. Atziri took her ship and made sacrifices of her crew. Forced the poor girlie into hiding.

Still, Kishara being of a wily inclination like meself, she slipped through Atziri’s talons and right out of the empire. But before she left, Kishara hid the Star somewhere near the Causeway that leads into the old Vaal city up north, just in case she got caught, I suppose. Something like that in the hands of a tyrant like Atziri… who knows what trouble she might’ve found with it.

Brinerots control the whole island, and make sure it lives up to the lowest of expectations.

Can’t imagine much has changed since I was there last. Still, it’s a good place to swash your buckle and make love to a bawdy buxom bunter out back of a boozy bar!

Aye, them Brinerots be a nasty bunch. Led by me very own flesh and blood. Me baby sister, Lussi! The “rotmother” they call her now. Used to be that I were their leader, back when the Brinerots were about one thing and one thing only – raiding, pillaging and plundering their scrawny black guts out!

Old Lussi were me first mate for years, but she got a whiff of the power that being Captain could gain her, and mutineered me! Me own sister! Dropped me on some deserted island off the coast of somewhere, the bitch. Took months to make it back to the mainland.

That Brinerot clan’s been trouble ever since. Used to have some good old fashioned pirate honour, and now they’re raving mad lunatics out for their next fix of fear and fortune.

I ain't gonna lie to yer, friend, you look like actual shite! Like a real big steamy pile of goat droppings. What in the bloody hell happened to yer since we last crossed compasses?

Well, never fear, your favourite captain, ol' Rot-Tooth is here to save the day. I guess I owes yer a bit on account o' bringing Lilly and I back together.

Arr, as yer can see, finally found the missing powder in me shot-pouch - by that I mean me courage. Managed to make me way over to Lioneye's Watch to see me granddaughter finally. Tell yer, I don't know what in the blazes I was fretting about. She took to me like a fish to water and 'twas as if no time had passed at all.

Anyhow, it be lucky for you that we did so, as we were out looking fer ya, to offer our thanks. Followed me compass, listened to the thaumaturgical whisperings of me ship, next we know, we be following a trail of blood and guts, leading straight to you, wasting yer time in the middle of god-knows-where!

Welcome ye ter Oriath! Smell that fresh, landlubber air. Ain't nothing like the air in Theopolis, full of debauchery and pollution, hidden neath the garb of them holy templars... Seems the place has changed a fair bit since last I were here, a lot more blood and entrails than what I remember. Well, best Lilly and I stay here where it be safe. You journey on ahead matey, see what blimey buggers you get to kill next.

Now there's a woman who can hold her own! Look at her! A marvelous specimen of the female persuasion.

Arr, reminds me of Meredith, me long lost sweetheart... Would it be that I could have a woman like that at me side once more. Someone to stare out over the bow into the salt spray of the sea with, someone to warm the cockles of me heart - and a few other things, in me bed; at night... Ah, now that'd be the dream...

Lousy good for nothing blackguard. In all me years at sea, never have I ever serviced a filthy blackguard on my lovely ship. If the Brine King still drew breath, I'd tell you having this Bannon aboard would be an affront to the lord of salt and scale... Him and his kind have hung drawn and quartered too many of ours. l don’t rightly trust him. Not at all.

Methinks Lilly is fixing to have her way with that damn Blackguard. Well, I'll tell you, not if I have anything to say about it. Look at me! Never thought I'd see the day where old Weylam were to be the prudish grandfather, yet here we are. Damn conscience'll be the death of me.

Say, yer not in the market for a new cutlass or anything are yer? Recently unlocked the Black Crest’s old armoury, found a whole shite load of weaponry down there from another time. If you fancy it, be glad to show yer me stock, see if there's anything in there you'd like to pick up.

Thank the sea! That bloody sod is gone from our world! Can't tell ya how many times I've heard them Karui savages gibbering in fear over that cannibal god.

And of course, there's ah... all of this horror to account for as well. Aye, don’t think there’s a man, woman or child in the world that won't be praising yer name tonight over a glass of their finest grog.

Speaking of which, where's a man to go to find a little fire water around these parts?