With the release of Path of Exile: The Awakening (version 2.0.0), item filters were introduced as an optional feature for players to customize what they see when items drop in the game.

There are multiple options from colors, text size, borders and even sounds

Although the game does offer a default filter, there is no in-game system for editing them; end users can write and tailor their own filter using a text editor. (Though there are several scripts out there that can do the hard work for you).

I wrote the original guide while the BETA for Path of Exile: The Awakening was running, and through that time I edited in new options etc as they became available.

As requested via my Original Thread on Path of Exile I have now made it available here.

To create a Loot filter, you generally need to use a text editor such as NOTEPAD Some versions of NOTEPAD++ Do work, but most do not from reports. Currently the Encoding must be ANSI or UTF-8

You can Edit your filter with the game still running. All you need to do is Open it, edit it and save it then press reload in the client.

A section is defined as a *collection of blocks*, typically with a general purpose in mind. For example, the section outlined in red is designed to highlight certain gems. All sections in a script should begin with a 4-digit header code, which can be used to quickly jump from place to place within the script.

A block is defined as a *collection of lines*, which have a singular purpose. In the block in orange, rare gems such as Empower are highlighted. A block must begin with a "Show" or "Hide" line. A block ends when another line containing Show or Hide is read by the client.

A line is used to give instructions *to the block in which it is contained*. The line highlighted in yellow gives a blue-green background to quality gems, but does not affect the block below it, which affects only rare gems.

Everything else will be hidden unless you press ALT

The most important thing to note is that blocks are read from top to bottom in the file by the client, The highest block takes priority, which means that you need to have the block that hides the scrolls, above before the line that shows the currency, because scrolls would also match the currency block.

This is why flasks come first in this list, They can not be rare and their droplevel is below 70.

An empty block matches all items, which means that the Hide at the end of the file effectively hides everything that wasn't specifically shown.

If you specify part of a name it will match all that contain that part of the name. For example "Skill Gems" will match both "Active Skill Gems" and "Support Skill Gems"

An example of why you should always use quotes for multi-word classes, consider the following:

I want to find all one-handed swords, thrusting and otherwise. So, I include the line

If it doesn't match those, it'll attempt to match on "Hand." This will mark: Two Hand Swords, Two Hand Axes, Two Hand Maces

Now, whatever styling you include will be applied to all of the above classes of weapons. If you really only want One Hand Swords and Thrusting One Hand Swords, use

Volume Adjustment is 0-300 (yet to find out normal value)

Height and Width You can set the height and width for an item to be for your filter to apply. This would work well in the RGB linked items section where you might not want to be picking up RGB items such as 2hs that take up alot of space in your inventory.

This would show any rgb linked items that are 1 space wide and 3-4 high, eg. Daggers, Wands, Thrusting 1h Swords, 1h Swords. Note that the height condition is obsolete since all these items with the RGB link are by definition 3 or 4 squares high.

Would show Helmets, Boots, Gloves, Claws, Bows, Scepters, Body Armours and some 1h weapons. Here the second line is almost obsolete, as it only excludes Wands, Daggers and some 1h Swords.

Size conditions should be handled with care when dealing with many weapons, especially swords, and shields, as these occur in several differently sized types.

Use a color picker such as in MSPaint 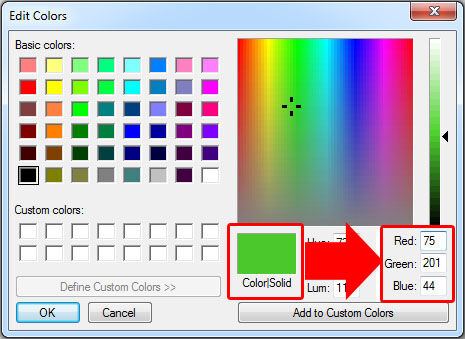 While most people are happy to put in the effort to make sure they haven't missed anything in their filter code, There are shortcuts to be taken without compromising your filter.

For instance, while you might just want to see everything else that you haven't specifically listed you can simply put

At the end of your file, which works the same way as Hide would.

You could want to see everything except Claws

Option 1:This option here could take you quite a while to type out.

But you do have options to make it easier!

Option 2: This option here cuts down on clutter within your code

Further, as the client doesn't need to have the entire group of items in quotation marks, "One Hand Swords" "Thrusting One Hand Swords" "One Hand Axes" "One Hand Maces" Would all be condensed down to "One Hand" or even "One" The same goes for Two Handed items "Two" - You could even show both of these, by quoting "Hand"

Option 3: You could take a much easier approach to hiding a single class of item.

If you wanted to see rare items, rare items between ilvl60 and ilvl74 and then rare items with an itemlevel of 75+

Even this code above has a line that is unnecessary. If you swap the first 2 blocks around, you can eliminate an entire line of code.

By doing this it does not need to check that it is ilvl74 or below for the Chaos recipe items, as it already knows from the previous block to show ilvl75+ items with a blue border. It then reads that for items with an item level of 60+ to put a yellow border around them.

This example is named Highlight.filter

Once you have saved your filter:

My filter is not working, what do I do?

Make sure your filter file is located in the same folder as your production_Config.ini file. If it is, then you need to make sure you've actually created a 'filter' file, and not a 'text' file with '.filter' in the name. To check this, right-click the filter and click Properties, if the file type is 'text', you did not change the file extension correctly. If you can not see your file extension, Show/Hide File Extensions in Windows

If you were to specify the following block It would show anything with Sai in the Items basetype, Such as Sai, Saint's Hauberk, Saintly Chainmail and Mosaic Kite Shield

This will now show Sai, but NOT Saint's Hauberk, Saintly Chainmail and Mosaic Kite Shield as it did before

Thanks to Antnee for the helpful Code Breakdown description!

Thanks to SayyadinaAtreides For the explanation on Using Quotation Marks for Classes.

I hope that helps!