Alone in the Darkness 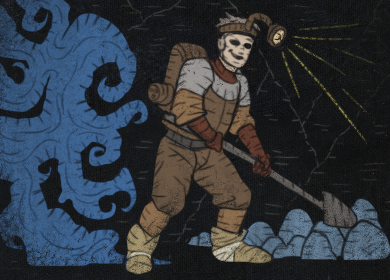 Alone in the Darkness5Delve Item"Sometimes, the most beautiful treasures...are the ones you cannot have."
- Beryl, Survivor from the Azurite MinesAcquisition
Area level: 1
Can drop from an Abyssal Trove.Vendor Offer
1x Scroll FragmentMetadata
Item class: Divination Card
Metadata ID: Metadata/Items/DivinationCards/DivinationCardAloneInTheDarkness

Alone in the Darkness is a divination card. A set of five can be exchanged for a random unique league-specific item from Delve league.

Can drop from an Abyssal Trove.

Despite the description of the card suggested that a set of cards can drop any Delve league items, according to streamer mbXtreme, by a small sampling size of 60 sets, none of them are items that restricted to Delve bosses (i.e. none of the rings or

Doryani's MachinariumDoryani's Machinarium
Maze MapMap Level: 80
Map Tier: 13
Guild Character: ‹
Item Quantity: (+40%-+60%)
Item Rarity: (+40%-+60%)(20-50)% increased Experience gain
Found Items have a 10% chance to drop Corrupted in Area
Unique Boss is augmented by Player choicesWe are ever the makers of our own undoing.Travel to this Map by using it in a personal Map Device. Maps can only be used once.

or Hale Negator or Command of the Pit or

).[1] Specifically, the following not supporters created items that were introduced in Version 3.4.0 (Delve league) may be considered as Delve league items and obtainable from the card:

According to Hrishi_GGG, "[They]'ve had a number of uniques that simply required the league to be active but wasn't tied to the league's mechanics in the past....Delve had a few league-specific uniques that were world drops and disconnected from the Mine as well."[2]

Thus, it is not certain that the card was designed to drop non-boss Delve item, or just due to weighting of the probability.

Based on community video