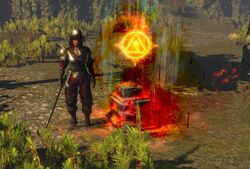 Alva, Master Explorer (real name Alva Valai )is a master. She gives the player access to incursions, followed by the Temple of Atzoatl once enough incursions are completed. Players can encounter Alva from act 7 onwards.

Alva can spawn in three different locations in a zone where she can be found. Speak to her and complete the incursion in each location.

To level up Alva, explore rooms in the Temple of Atzoatl:

"Exploring" a room only requires you to walk inside a room (i.e. you can walk through the door and then leave if it isn't a reward room). Each room only counts once regardless of getting it again in another Temple. A T3 room counts as a T1 and and T2 as well, so a T3 room counts are exploring 3 rooms rather than 1.[1]

Thank the gods! You're no saint, I can see that. Though who am I to question what form divine providence comes in?

I am the great Alva Valai! Reliquarian extraordinaire, seeker of mysteries, explorer of the unknown, lover of all things that glitter - and I need your help.

The lost Temple of Atzoatl; Halls lined with finery, boxes stuffed with glimmering riches and relics touched by insurmountable power! For eons lost to history... until now.

No Time like the Present, before Greust was killed, trigger in the town)

I believe the secret of its location lies in the Vaal City which, until very recently, was submerged and completely unreachable. But with all that's going on, the city has risen from the depths, and... well, it's still completely unreachable. It seems the only way to get even close is across the river, and the only crossing is overrun with bandits. I've a plan that could make both of us unbelievably wealthy, but... perhaps one day....

No Time like the Present, before Greust was killed, trigger in the wild. )

I believe the secret of its location lies here in the Vaal City which, until very recently, was submerged and completely unreachable. It's a tale that beggars belief - some devil coated the land in darkness, but a hero banished it and raised the city from the riverbed! Then some bandits swept in, claiming invaluable artefacts and blocking the only entrance until an even mightier hero sent them packing. If they were around I'd ask them to help me achieve unfathomable wealth, but... you'll do I suppose.

No Time like the Present, after Greust was killed, trigger in the town. )

I believe the secret of its location lies in the Vaal City which, until very recently, was submerged and completely unreachable. It's a tale that beggars belief - some devil coated the land in darkness, but a hero banished it and raised the city from the riverbed! Then some bandits swept in, claiming invaluable artefacts and blocking the only entrance until an even mightier hero sent them packing. If they were around I'd ask them to help me achieve unfathomable wealth, but... you'll do I suppose.

When I was young, my father gave me my first call to adventure by enlisting me in the employ of Dominus' navy. I used to love the sea. The way it smelled. The freshness of the air... but, some 'stuff' happened and I returned to Theopolis, intent on living a ladies life. Ha, it was not to be, obviously.

My lust for excitement brought me to the Reliquarians - a secret society of treasure hunters, funded by those cold and greedy societal uppercrusts. I had my father pull some strings and before I knew it, I was amongst it all, raiding temples and tombs across the land. But, well... you're an exile, you know how the Templars are. Untrustworthy is one way to describe them. When I came across a manual of Vaal blood thaumaturgy, I knew I couldn't let it fall into their hands. And it never did.

Though that damned High Templar knew I was keeping something secret... And so, no longer welcome amongst the nobility, here I am. Luckily there's a fortune to be made here and a few of my old clients still remain loyal to me when it comes to spending what they have inside their purses.

The lost Temple of Atzoatl is said to be the most famed in all Vaal history and myth. Best I can tell, the Temple began its construction in the final years of the Vaal Empire. The exact date of its completion has been hard to ascertain as it occurred shortly before the events which brought about the civilisation's extinction.

Perhaps it is the fragility of the timeline that has made Atzoatl such a staple of Vaal mythology. Some say it was a place of darkness, home to the most vile of sacrifices. But there are others who claim the temple to be the birthplace of technology - even our own is said to pale in comparison to what was being forged within those walls.

Scholars today have even suggested that it was the treasure house for Queen Atziri herself. Whichever is true, it was bound to have been fiercely protected by fanatics and royalty alike. And if something's worth protecting, well, then it's worth bloody taking!

Well, most of my market no longer exists... but, I'm an adaptable type, and there are plenty of pirates, thieves, tyrants and nutters who will pay good coin for my finds.

I may just have to do a little extra legwork to find 'em.

Einhar would have fit into Atziri's empire quite nicely. The man's no stranger to ritual sacrifice, though thankfully he limits his bloodletting to beasts. He doesn't seem to have much of an interest in opulence, which is great news for me. As long as Einhar sticks to what he's best as, we'll get along fine.

Niko's a bit of an... oddball... yes, but if you can put up with his quirks, he's not without his uses. The mine he so passionately guards is simply filled to the brim with glittering goodies. I've been trying to cozy up to him in the hopes that when he hits the motherlode, I'll be right there next to him.

I've never met anyone as protective of their creations as Zana. It's not like her astrolabe thing can send us back in time... wait, can it? What does that thing do, anyway? I've seen the places it takes her. Some of them are truly horrifying! They make the Vaal look tame as kittens. Not Zana though... She's a lion with a kitten's face.

I'm trying to stay on Jun's good side. She's not aggressive or anything -- not to me anyway -- but I've seen her polishing daggers, staring off into the distance. That's a look I recognise from my days around some less-than-reputable treasure-hunters. A killer's look. She's out for someone's blood.

I've not spoken to Navali about it yet, but I have to wonder how our little forays into the past affect her visions of the future. I also wonder why she isn't using that little power of hers to make us all unbelievably wealthy. Imagine all the Grand Arena matches we could bet on! I'd much rather watch some disemboweling than do the disemboweling myself, if it's all the same to her. I guess, when you really think about it, all that Vaal blood is on her conscience!

Order of the Djinn

So Jun's people snuck about history stashing powerful artifacts, did they? Do you happen to know if any such artifacts were stashed in the Temple of Atzoatl at any point... no? Fine. Just a thought.