Quick Guide: This article has a quick guide that shows you how to explore the Atlas of Worlds, and how to chase the Conquerors and find The Maven.

This page is about the game mechanic. For other uses, see Atlas of Worlds (disambiguation).

A nearly completed Atlas of Worlds. The Tirn's End region (center) has a yellow background meaning maps in the region are influenced by Drox, the Warlord. 3 out of 4 conquerors have been slain towards a Sirus fight (center). Watchstone trays and favorite maps (left) and available master missions (right).

The Atlas of Worlds is Path of Exile's end-game map system. The Atlas is a series of linked maps that players can progress through after completing a quest for Officer Kirac. It is explored and discovered by running maps within the Map Device at a player's hideout.

The Atlas of Worlds is a visualization of the dream worlds that are opened by activating maps, indicating how these worlds are linked. The player starts at one of four starting maps in the center of the Atlas. These tier 1 maps start dropping on Act 8. Players can find new maps in adjacent, connected maps in the Atlas.

The Atlas comprises more than 150 different maps. Maps have a chance to drop in other connected maps, and they can be traded between players. The Atlas has 8 regions each of which have many maps within them. Each region has a citadel, which is an interface that allows socketing 4 watchstones within it. These watchstones can have various crafted modifiers, that players can add onto them using sextants. Quest watchstones drop from defeating the Conquerors, while craftable watchstones can be purchased from other players or obtained as boss drops. Each region also allows players to select unique Atlas passive skill perks that affect drops and environmental effects within that region, such as improving Blight, Harvest, Delirium or other types of content.

Every map has one or more unique bosses. The Atlas has two bonuses which affect map drops, being the Atlas Completion Bonus and the Awakening Completion Bonus. These bonuses must be earned by defeating the map boss under certain conditions.

The Atlas has many end-game bosses that players can fight, such as Sirus, Awakener of Worlds which can only be encountered by chasing the Conquerors across the Atlas, and The Maven which requires completion of the Maven's challenges in The Maven's Crucible. Other bosses like The Shaper, The Elder and Uber Elder can be fought repeatedly simply by using a special set of 4 map fragments in the Map Device. 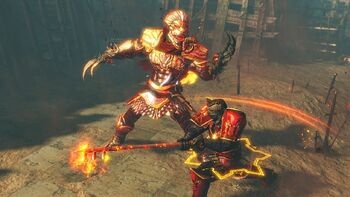 Map drops are not completely random; instead, a specific tier is chosen first and the map type is chosen from a pool of maps completed for that tier or connected to the map the character is currently in.[1]

Only connected maps and maps previously completed can drop from a map area. In addition to these rules, this map drop pool only consists of maps that are currently visible on the Atlas meaning maps that are removed from changing Watchstones are removed from the drop pool. There are a couple exceptions: During Zana's missions where you can obtain maps without restrictions from your Atlas progression, unique maps which can also drop their base type, and various league content that may drop maps.

Following this, when a map drop's tier is rolled and no maps of that tier currently exist on the atlas, a map isn't dropped but instead adds to a "map equity" system that helps higher tier maps to drop.[2][confirmation needed because of 3.10 change]

The Atlas is split into 8 different regions, each affecting a Watchstone or Conqueror's area of influence and what item bases can drop.

A new region without any maps is:

For each map completed under certain conditions, you gain an Atlas completion Bonus. Each Bonus adds a 1% chance for a map to drop one tier higher, with each 100% chance automatically upgrading the tier of the dropped map. The maximum map tier, however, cannot bypass drop restrictions, even if it would have been upgraded.[3]

For example, a rare monster in a tier 6 map with 125% completion bonus:

The following maps do not count towards Atlas completion:

Special areas like Map fragment zones also do not add others Atlas completion.

Tip: To quickly get to Awakening Level 8 without chasing the conquerers, buy cheap Chromuium or Titanium watchstones and fill all the citadel sockets in your Atlas.

The Awakening Level of your Atlas is the number of Watchstones you have socketed, divided by 4, and rounded down.

The highest Awakening Level obtainable using only watchstones is A8, however after the Echoes of the Atlas expansion, players can obtain A9 using the Atlas Awakened skill from The Uncharted Realms Atlas passive skill tree.

Awakening Levels increase the difficulty of all map bosses due to the "Unique map boss has X% more life", but grant bonuses to item drops when killing those bosses. It also enables Awakened Atlas completion bonuses at higher levels, granting further bonuses to map drops.

Each Awakening Level adds the following:

Awakened Atlas completion bonuses are acquired by completing the map at a certain Awakening Level or higher. In order to complete an Awakening Bonus Objective, it is merely required to finish the map at it's maximum tier while it is influenced by four Watchstones, while the Awakening Level requirement is met. Rarity or corruption of the map is irrelevant.

Once per day, when you log in, you will receive one Atlas missions for each master for the tier relative to the last map you've completed (-1/+1 range). Free Atlas missions refresh at midnight UTC. The map must be completed the day before in their own map device. Completing party-play maps from other players map devices does not count. Completing blighted maps do count.

Each time you complete a map, there is a 35% chance to receive an Atlas Mission for a random master. You can use Atlas Missions to guarantee a master to spawn in your next non-unique map. Your Atlas Mission counters are tracked for each set of map tier colours: white, yellow, and red; which one you receive is the same as the tier colour of the map you received it in. Your accumulated number of Atlas Missions can be seen in the Atlas layout screen. There is no limit to how many Atlas Missions you can store. You can redeem an Atlas mission by speaking to a master then running the map from that screen, or via the mission buttons in the map device interface.

Note that as only a single master can appear per map, the use of a master mission will prevent triggering other sources of master spawning, including the flat 10% chance of triggering a random master per map. It is possible to get a slight increase in chance of encountering a specific master, by avoiding atlas missions for the other masters.

Conquerors of the Atlas

When exploring a map, there is a chance that one of the Conquerors of the Atlas, Al-Hezmin, the Hunter; Veritania, the Redeemer; Drox, the Warlord; and Baran, the Crusader, appears and spreads influence over the Atlas region. Whenever a Conqueror appears in a map, they will occupy the Atlas region and add packs of special influenced monsters to the map whenever they appear. After their third appearance, you can speak to Officer Kirac to locate their Citadel, then talk to Zana to open a map device screen with a map where the Conqueror's Citadel is located. This map can be modified and can have map fragment and Scarab bonuses applied to it, but only 20% of the map's Item Quantity bonus will apply to the Conqueror boss. Once you defeat the Citadel's map boss, a portal leading to the Conqueror's arena opens up, where you can fight the Conqueror themselves. Each Conqueror will drop a Watchstone on defeat, which you can slot in a Citadel to upgrade all maps within the region to higher tiers and possibly reveal new ones.

Influenced monsters and the Conquerors have a chance to drop Influenced items, special item bases which can roll mods unavailable to regular items. 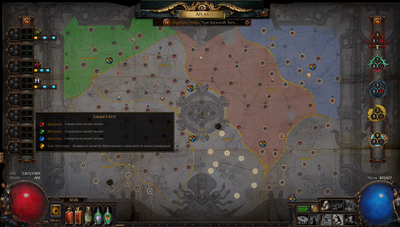 To spawn a Conqueror for the first time, you must first explore maps in the outer Atlas regions (Haewark Hamlet, Lex Ejoris, Lira Arthain, New Vastir). Once they make their appearance, they will reappear whenever you run a new map located within the same region. Opening a new map with the same base as the last one is allowed. After they drop their first Watchstone, to get the next Watchstone, you will need to explore maps in regions with the required number of Watchstones. The map's tier must also be equal or greater than the base displayed on the Atlas. Before defeating the Awakener, a Conqueror will always appear in each new map as long as the requirements are filled, but they will not reappear in the same region. Hovering over the Watchstone slots on the left side of the Atlas screen will display the requirements needed to spawn a Conqueror.

After ending the individual quests:

The Warlord and defeating all four Conquerors, you can fight Sirus, Awakener of Worlds. Once the four Conquerors are defeated, speak to Zana to open six portal to Sirus. After you defeat Sirus or lose all portals against him, you must defeat the Conquerors again in order to refight Sirus.

After defeating Sirus for the first time, you can spawn a Conqueror in any region with four Watchstones (you can spawn the same Conqueror in regions you've already acquired a Watchstone from), but you will need to run more than three maps to be able to fight them again. There is a 50% chance for a Conqueror to appear for the first time. Afterwards, the Conqueror will reappear after running a specified number of maps in the influenced region. A bar on the left side of the Atlas screen shows how many steps are required to spawn a Conqueror. The blue square shows when the Conqueror will appear and spawn influenced monsters. Defeating Sirus is not required to acquire more Watchstones.

When the current league ends the progress on the Atlas of Worlds is transferred to the relevant parent league. The parent league is generally Standard or Hardcore.

The merge has the following rules:[4]

A catch up mechanics was added to the Atlas since version 2.4.0.[5]

Since the Atlas shuffled every time at the start of new league and big patch (currently each time the game release the 3.X.0 patch). Using a T16 map (natural tier 16 map) from the legacy map series will unlock the completion of T1-15 maps. If it is a rare corrupted legacy map, it will also unlock all bonus Objective of the T1-15 map. If the Atlas is socketed with 8 sets of Watchstones (Awakening Level 8) when completing the legacy map (such as using legacy

Vaal Temple MapVaal Temple MapMap Level: 83
Map Tier: 16
Guild Character: >Voices. Visions. Violence. They will haunt these grounds for all of eternity.Travel to this Map by using it in a personal Map Device. Maps can only be used once.

), it will also unlock all Awakening Bonus Objective of T1-15 maps that requires Awakening Level 8.

This is a list of base item types that can only drop on particular maps on the Atlas of Worlds based on the map's region.

Drop location based on atlas region