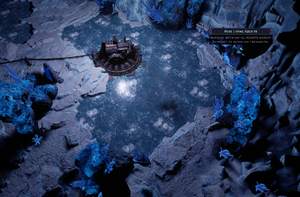 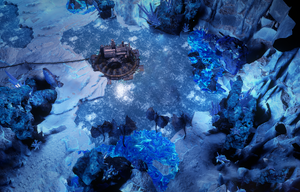 An Azurite Cavity encounter in progress, with monsters spawning to attack (bottom)

Azurite Cavity is a node in the Azurite Mine, and is the primary source of obtaining Azurite required to unlock various upgrades at the Azurite Mine Encampment. It is the lowest tier Azurite node, known as Tier 1. It can spawn in any biome.

The encounter is divided into add phase and boss phase. After reaching there with Crawler, there is an environmental object to start the encounter. The encounter would at first spawn adds, such as Azure Ape, (a variant of Ape), Azure Shrieker, Charged Shrieker (variants of Shrieker) , Cave Weta (a variant of weta). Unstable Weta (weta that casts Cold Snap on death), Hatchling, Skitterling (both spiders), etc. Only the Unstable Weta is the most dangerous due to its on death effect which scales with the depth of the mine. Unstable Weta looks bigger then the

the player can purchase as well the Cave Weta which can be encountered in the mine.

After clearing some of the adds, the node will start to spawn the boss(es) of the node, the Living Azurite, which can be in normal/magic/rare rarities. Killing the Living Azurite will complete the encounter as well as dropping Azurite to be collected.