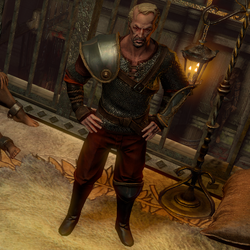 Bannon is an NPC located in Act 5 and Act 10. The player first meets him after killing High Templar Avarius in The Chamber of Innocence, where the player learns the god Innocence, that the player had quelled, now resides within Bannon.

Introduction at Chamber of Innocence

(When approached in the Chamber of Innocence Post-death) Bannon: What in damnation have you done?!

You've destroyed Him and yet... I hear the voice of Innocence, begging for our forgiveness, asking for our help... you and I. I heard Him the moment the High Templar fell, whispering inside my damned skull, His heart beating within my chest.

Innocence protects us now, holds fast the door against the murderous tide that rushes to meet us. He wants you to pass through that door, to bring order to the chaos beyond.

I don't understand any of this. Moments ago I was just a soldier obeying his High Templar. Bannon the Nobody. Now... my god lavs inside my head, telling me to let you through that door and to make my way to... Overseer's Tower, if it still stands.

It does? Alright. I don't know what's waiting for you out there, but should you survive it, I'll see you at Overseer's Tower.

We're glad you made it. No, dam it all, that's just too strange to abide. I'm glad you made it, and Innocence tells me I need to keep helping you. So that's what I'm going to do.

I know my way around weapons and armour, and all things Templar if you should want for further enlightenment on that subject. As for Innocence...I don't know. Sometimes he makes sense, other times... he's a shattered god, but he'll heal. I'll make sure of that.

I'm having a little trouble explaining it myself. I've never been the most devout of men, especially for a Templar. More of a soldier than a believer. But now? Innocence himself rests within me. His voice is weak, barely a whisper, yet still he has the power to keep us safe from Kitava's hunger ...at least for now.

For my part, I'm simply grateful. Grateful that I have a god watching my back, and grateful that He's given me the power to watch others in return.

For a long time now, I thought my God's intentions were being twisted by his supposed servants. Did I speak up? No. The pyre would have been my only answer. I did what I was told and drew the lines of morality where I could.

Now I understand the truth. It wasn't Innocence's intention being twisted. It was Innocence himself, perverted by the selfish convictions of the men and women who worshipped Him.

The Sign of Purity? Let's see... a staff, bathed in innocent blood. No, sorry, bathed in the blood of Innocence. Yes, Innocence gave a part of his divine self to the thing and gifted it to the Templar.

Now that I recall, I read a tome about it when I was a cadet. Bloody long time ago. I skipped most of the boring pages, so only remember the bit where High Templar Maxarius[1] 'smote with flame the army of the faithless with one ray of its hallowing light'. The book's words, not mine.

Outside of my humble flesh, the Sign of Purity's about all that's left of Innocence.

Devotion should be honoured, I suppose. For centuries now, the Templar have boiled the flesh and skin from the devout and presented the polished remains for public appreciation in the Ossuary.

Personally, I think it's one of the better ways to remember those who have gone before us. To touch the bones is to remember neither the legend, the legacy, nor the lies. It reminds you that those bones belonged to a man or woman who as just like any other man or woman.

I'd be lying if I said my hands were clean of slavery's blood. I was a soldier. I went where Dominus ordered me to go. I sailed with the expedition to Ngamakanui, killed Karui warriors and rounded up Karui captives like every other bastard in Templar uniform.

So I don't blame Lani for wanting to take back her freedom. And I don't blame her for believing Utula's lies either. I certainly swallowed enough of Dominus' falsities to sicken my soul.

It's what we do now that matters. I can see that Lani's heart is in the right place, and for once in my damned life, so is mine.

To be perfectly honest with you, I don't trust her. Yeah, I've got my reasons. Piety kept her work pretty quiet but her results were brutally clear. The people she took, the people she...changed. Slaves mostly, and a few 'enemies of God'. Enemies of bloody Dominus more like it. I don't go in for black and white definitions of good and evil, but with Piety and her ilk, I make an exception.

Whatever's lurking inside Vilenta it ain't 'good', not by a long shot.

Lani's told me a little about Utula and his cult of Kitava. Enough to know what Utula's got planned. Bring about the fall of one gods so he can raise up one of his own. And this Kitava, from what fragments I can piece together from Innocence... he's not of the benevolent kind.

Put an end to Kitava’s savage reign, for there remains much in this land that is worth saving.

Phew! I would thank God for you my friend, if that weren't too on the nose. I felt for sure that this time it was my turn to depart our world.

Kitava's cultists surrounded Lani and I a while back... We split up and I lead a distraction so she could make best her escape. Funny, I really should have considered my own plan for evasion once I'd allow her hers...

In any case, it is good to see you again, exile. Let us talk more in a safer place. I shall meet you back at the docks.

Ah, good to see you made it back.

You look at me with suspicious eyes... Yes I know you have your apprehensions about me and my new indwelling spirit, but if it helps a little, I feel Innocence stirring inside me, awakening with an odd sense of gratitude towards you.

It was, after all, your bite that returned him to humility, allowed the scales to drop from his eyes...

If you are to go wandering the city in its current state, be careful where you step. Kitava's cultists are constantly out on the prowl, actively seeking food for their god. What's worse, the passage to Kitava's feast is blocked off by two large black gates. We call them Kitava's horns and they are utterly impenetrable to the motions of man.

There is but one way in which we can reach Kitava and deprive him of his eternal meal. The staff of Avarius lies somewhere amongst the rubble of the Chamber of Innocence, still billowing with holy power. If you were to find it and return it to me, I believe the power in the staff will act as power enough to break though the horned gates.

While they had me trapped, I heard those cultist's mad gibberings. Their words were akin to that of the Wraeclast cannibals, nonsensical sentences accompanied by the most unsettling of cackles. I fear that they have indulged too deeply into Kitava's famed habit and caught the laughing plague that so accompanies men and women who chooses to engage in the consumption of human flesh.

As I'm sure you've noticed, that damnable god, Kitava no longer esides on the rooftops as last you were here. No, the monster has acclimatised himself to Theopolis. He has set up quite the banqueting table for himself. It appears he believes he has a lot of... consumption to catch up on. Best I can tell, his new residence lies through the ravaged Oriath Square and past the canals, now the feeding troughs...

Heed my warning friend, tread lightly through that area, for those cultists are out and about, once more, actively seeking food for Kitava to devour...

I wouldn't blame you for being curious about the god now dwelling within me. In truth, I'm honored to have been chosen to be Innocence's vessel. You may hear this and think I sound like a pious Templar food, but it is hard to remain an unbeliever when the gods walk around you, and indeed one, sleeps inside you.

No need to fear however, our poor purity god surely regrets the actions of the his past. I can't see him, but I can feel his spirit, wounded and cowering somewhere inside me. At night, I hear him whimpering over his wounds - I must say, you hurt him good! But, as much as I feel his pain, I also feel a budding newness in his heart, he is growing again and relearning the compassion for humanity that he had long since lost.

The Chamber of Innocence is exactly where you left it, though cultists and vandals may have had their way with it since last you visited. Innocence himself no longer cares for the place, in fact, I feel a pained revulsion for it, hence why I cannot go myself. But I'm certain you are more than capable of forging a path though that broken temple once again.

Back when the cultists took control of the city, the very ground itself shook as if pained by some dark abomination, and the gnarled horns of Kitava erupted from the earth, like spiraling pillars of corruption, weaving together a barrier impeding travelers from moving through the city.

Handing in the Staff of Purity

I fear I have not been entirely honest with you friend. While it is true that this staff can forge a path for us through Kitava's horns, it is through its ability to revitalise Innocence into waking fully, that the staff's true power resides.

In this act, I will become his host in the fullest sense and together, he and his brother Sin will be able to ally with you against the forces of darkness.

I bid you farewell, Exile for where my spirit is set to travel, there is no return. Win the battle. Defeat Kitava. Free our people.