From Path of Exile Wiki
Revision as of 17:42, 7 June 2019 by BotK2 (talk | contribs) (PyPoE/ExporterBot/1.0.0a0: Item exporter)
(diff) ← Older revision | Latest revision (diff) | Newer revision → (diff)
Jump to: navigation, search
Bear TrapTrap, Spell, Duration, Physical
Mana Cost: (6-23)
Cooldown Time: 4.00 sec
Can Store 3 Use(s)
Cast Time: 1.00 sec
Critical Strike Chance: 6.00%
Effectiveness of Added Damage: 200%Throws a trap that damages and immobilises a single enemy for a duration based on how much damage was dealt. After the immobilise expires, a debuff remains on the enemy for a duration, lowering their movement speed by an amount which lessens over time. The affected enemy will take increased damage from traps and mines until the debuff expires. Modifiers to spell damage do not affect this skill's damage.Per 1% Quality:Throws a Trap which uses this Skill when Triggered
Trap lasts 4 seconds
Deals (16-1447) to (22-2026) Physical Damage
Enemies take 15% increased Damage from Trap or Mine Hits
Enemies have 80% less Movement Speed when the Debuff starts
Base duration is 3 seconds
Locks enemy in place
Traps do not Trigger at the end of their DurationPlace into an item socket of the right colour to gain this skill. Right click to remove from a socket. 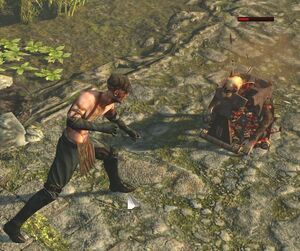 Bear Trap is a cast throwing a trap that immobilises and deals physical secondary damage to a target when triggered.