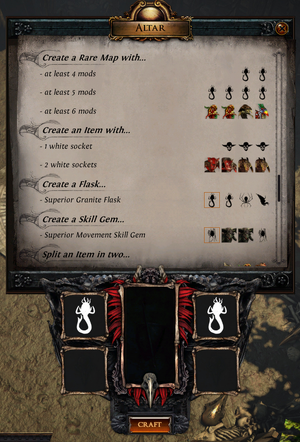 Beastcrafting is a method of crafting by sacrificing beasts to the blood altar in the Menagerie. Each beastcrafing recipe requires four beasts to be sacrificed, with most of them requiring one specific Red Beast and three Rare Beasts. The four chosen beasts are released into the arena surrounding the blood altar and must be killed to complete the recipe. If the player dies during the attempt, the recipe fails and the beasts are lost.

If an item is created, the resulting item level is equal to the level of the main beast sacrificed. Recipes that create unique items can generate league-specific uniques.

The table below displays the resulting crafts when sacrificing to the blood altar.