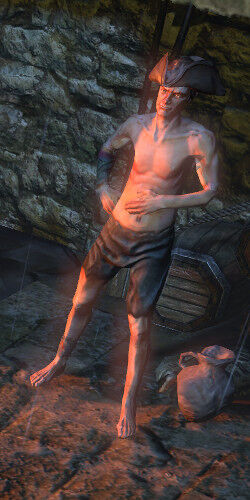 Bestel is an NPC that can be found in Lioneye's Watch in Act 1 and Act 6.

Bestel claims to be the captain of a wrecked ship known as the Merry Gull. He has a penchant for bad poetry and bad humour.

Lilly Roth has a dialogue about Bestel and vice versa.

A dashing Duelist, drenched and deserted on the dreary strand. That's the first line of the poem I'm writing about you, exile.

Easy lad. You could lacerate a bloke with a look like that.

A tyrannical Templar, to be tested and tempered in the straits of Wraeclast. That's the first line of the poem I'm writing about you, exile.

Easy mate. You could damn a bloke with a look like that.

A sodden Shadow staggered from the surf and surveyed the somber strand. That's the first line of poem I'm writing about you, exile.

Easy, lad. You could poison a bloke with a look like that.

A waifish, waterlogged Witch, washed up in Wraeclast. That’s the first line of the poem I’m writing about you, exile.

Easy, girl. You could scorch a bloke with a look like that.

The name’s Bestel, captain of the good ship ‘Merry Gull’. Alas, my Merry Gull is gone. My crew is gone. But my wits remain… after a fashion.

Poor Nessa. Not even a mother herself and yet she cares for us all. And what a sickly, pathetic brood we are. May she live to have her own family, a real family. If anyone deserves that, Nessa does.

Tarkleigh rescued from the waves
A stricken Bestel, fate's slave.
From fallen crew and broken bark,
Bestel lives, thanks to Tark... leigh.

Arrol, the Merry Gull's cook, washed up on the rocks over yonder. Dead as a doornail he was. Buried him myself.

Then a few days later I see him on the beach... a little worse for wear, but upright, shuffling about. A land full of disturbing surprises, this Wraeclast.

Brutus, Warden of Axiom Prison. The way I heard it, albeit from ale-soaked sailors, fear unmanned the great Brutus. Not fear of man, nor beast… fear of death.

Life is like wine, best enjoyed in moderation. I don’t envy Brutus’ hangover.

Marceus commanded the southernmost of the Eternal Legions, here at Lioneye’s Watch. Why was he called Lioneye? Crazy fool had his left eye taken out and a golden-hued gem put in its place.

His head must have made quite the pretty adornment for King Kaom’s belt.

This dialogue is a time-limited event. It only available when you meet Captain Fairgraves during the start of

The Marooned Mariner quest and before getting the

AllflameAllflameDistilled from naked ambition and unfettered obsession,
the Allflame emanates a silvern warmth like no other,
and engulfs those moths fool enough to embrace it.

Fairgraves? The explorer? No-one’s seen nor heard of him since he set sail for Wraeclast over thirty years ago.

So if you’re about to tell me that you’ve met Captain Fairgraves in the flesh, then you’ve either met a liar, or something far, far worse.

This dialogue only available when finishing the

Fairgraves was a good man, a fine explorer. He opened the door to many a new world, for better or for worse. Usually for worse when it came to the natives.

There's some peace in the knowledge that he now rests where he should. Let's not speak of Fairgraves again, shall we? He was an inspiration to many. Would be a shame to spoil a good hero.

Those butchering buccaneers sailed off that way, the ones that plundered my poor Merry Gull. T’would be poetic justice if they’d stopped off for a sing-a-long with Merveil’s lovely daughters on their way home.

Piety’s raised Shavronne’s Barricade? Not that I was likely to ever make the trip inland, but it was nice to have the dream.

Hang on a moment, got a stray thought seeking safe harbor. Piety’s one to watch her own back, so she’d never cut off an escape rout from possible trouble inland.

The cunning witch must be able to lower that barricade from the other side, somehow.

There's an island, a hop, skip and a wade offshore of the Terraces. That's where my Merry Gull ran aground.

Watched the locals spit-roast the ships doctor, but his medicine chest might stil be there, amongst the splinters and bones. It'd have everything Nessa might need.

Doctor 'Shaky Hands' Opden was lousy with a scalpel, and even worse with a saw... but he knew his apothecary. Explains the shaky hands, if you ask me.

A stranger like no other,
Faces the wall of the Umbra,
Opened a pass in a sorry land,
Gave some hope to a sorry band
Of exiles and death-soaked castaways.
A chance at life on a brand new day.

One day we'll be strong enough to make our way inland, build new lives on the carcass of a dead empire.

It's why God sent us maggots here, isn't it?

Now there's a pair of eyes I could never forget. If the tales are true, those peepers of yours have seen all the wonders of Wraeclast by now... and a few things they likely wish they hadn't.

Oh, and no need for us to speak of Oriath. My ears are brim full with the sorrows these wretched companions of yours have been spilling.

Now there’s a sorry tale, more miserable than any dirge I’ve ever heard. Nessa’s gone… Wandered off into the night muttering to herself about ‘dancing to his ditty’.

No, I didn’t go after her. In truth, she was gone when I woke up the next morn. I only imagined she’d be muttering, you see, on account of the murmurings she’s been making these past few weeks.

Always the same, about ‘him’ and ‘his song’, whoever in damnation ‘he’ is.

You do know it’s cruel to make jests of an addled mind, don’t you? Nessa alive, and turned into bloody cod? Hah! That said, you’ve never been wrong before so seems like I’m going to have to stare this fanciful tale in its fishy face.

She talked of the Bring King, did she? Now there’s a name what can trouble the breeches off even the most jaded of poets. Though Merveil might be dead, the sea still has its seductive songs, and this time it’s a big, briney baritone doing the wailing.

Lilly Roth? Granddaughter of the legendary Rot-tooth Rot? Oh, apologies if I seem a little... Giddy. It's not any old day you get to meet marine royalty. I mean, you know how I feel about pirates and all, but the Roth have as much in common with those scurvy sea rats as a... as a shark does with a goldfish.

Lilly has her Granddaddy's blood in her veins. It's plain for all to see. Look at the lustre in her eyes, the ruddy blush of her skin. That there's a pirate princess, and no mistake.

Yes, we live in curious times indeed. A time when old stories are being birthed, mewling and puking, into our world of dirt and blood.

It's all a bit inspiring really, hence I've written a little something.

With Kitava now stomping around Oriath, it seems mythology is fast turning into reality.

Then again, the gods didn’t just spring out of some poet’s head. I certainly couldn’t pen an ode to the God of Eternally Flowing Ale and then just stick me mug out to catch the free brew.

No, I imagine the gods once dined, danced and defecated just like you or I. Now they seem ready to take another stab at it… at life, I mean.

Take the Karui Father of War, for instance. Old Tukohama. All comfily tucked up in Kaom’s holdfast and playing war like a few thousand years was only a quiet weekend for him.

Come to think of it… perhaps it was!

You won’t find a sailor that doesn’t whisper a quiet prayer to the Brine King before casting off. In fact, under the maddening radiance of a full moon, the more superstitious captains would drown some poor slave or failed mutineer… just to keep old Tsoagoth happy.

No, that wasn’t a sneeze. That’s the fish god’s old Azmerian name. It’s considered foul luck to speak it on board a ship. A keel-hauling offense.

Clearly the old Brine King wasn't worth his salt! A fish out of water if ever there was. But I suppose, as someone wise once said, 'you can't teach a crab to walk straight'.

Too much? Yeah, be honest with you, all this fishy mirth is just me swimming around a fishy topic.

She's not coming back to us, is she? Can't say I'm surprised, what with everything she's been through... what she's become.

I wish her all the happiness she can find out there in the sea. More than she could muster on this gods-awful land of ours.

You’ve the deck of the mighty Black Crest under your feet and old Weylam hisself to man the helm? Well I’ll be a pirate’s monkey-mate. You sure do know how to travel in style, exile!

Screams. Howls and booms of unholy intonation. The shriek and clank of some unfathomable apparatus and the pervading stench of scorched flesh and boiling blood. That’s Axiom Prison now that our lady of Umbra has come to home to roost.

As a poet, I have nothing against a little creativity. Yet while I might mould word and wonder, Shavronne’s art tends towards the visceral. Flesh, bone and soul.

Artistic pursuit is the loftiest of callings, but in this instance, I believe some rigorous criticism is in order.

You've the deck of the mighty Black Crest under your feet and the mighty Weylam Roth hisself to man the helm? Well I'll be a pirate's monkey mate. You sure know how to travel in style, Exile!

You'll not find a more renowned pirate as Weylam 'Rot Tooth' Roth. In times when Fairgraves was still a whelp earning his sea legs, Rot-Tooth was prowling the Strait of Oriath in his ship, the 'Black Crest'.

It's said he built it hisself, lining its hull with the bones of some great sea beast he slew with nothing but a harpoon and a bottle o' rum. Never was there a more nimble, ferocious vessel. Like that Leviathan's spirit still lived and breathed in its timbers.

No-one's sighted Rot-Tooth for twenty years or more, But I know where the Black Crest is. The ship graveyard, no less. Seems that Weylam Roth might have had his last meal with Lady Merveil.