View source
Blade FlurryAttack, AoE, Channelling, Physical, Melee
Level: (1-20)
Cost: 4 Mana
Attack Speed: 160% of base
Attack Damage: (32-45)% of base
Effectiveness of Added Damage: (32-45)%
Radius: 14 / 17 / 19Requires Level 28Repeatedly hit enemies in a circle in front of you while channelling, dealing damage to and around the enemy. The damage is continually boosted while channelling. You unleash an additional hit for each stage reached once the channelling ends. Requires a Dagger, Claw or One-Handed Sword.Per 1% Quality:1Superior2Anomalous3Divergent0.5% increased Attack SpeedFinal Flurry has 1% increased Area of Effect2% increased Elemental Damage while ChannellingDeals (32-45)% of Base Attack Damage
20% more Damage with Hits and Ailments for each stage
(14-75) to (20-113) Added Attack Physical DamagePlace into an item socket of the right colour to gain this skill. Right click to remove from a socket. 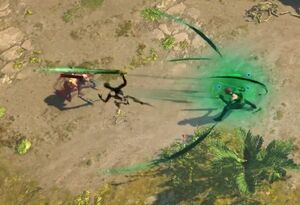 Blade Flurry is a channeling melee attack. While channeling, Blade Flurry repeatedly attacks a random enemy in front of the player, also damaging enemies nearby the original target. When released, it will unleash an extra number of attacks equal to the stage reached.

Blade Flurry's tooltip DPS is not accurate, because it shows Average Damage (ignoring Attack Speed) and doesn't account for stage bonus. Here is how to calculate the actual DPS:

where Base is the base damage given by gem level, and StageMult ranges from 1.1 to 1.85 (see table in Derivation) depending on which stage level was reached before releasing. This formula also assumes the player's return strike(s) can hit an enemy; remove the 2 in the middle to approximate what happens when the return strikes don't hit an enemy.

or 266% weapon damage per second. Note that the DPS will be slightly lower in practice because players cannot reach perfect channeling, only get very close.

We can begin with the most basic formulation, which is damage without channeling bonuses or return strikes. Let

represent base damage multiplier and

represent attack speed modifier as listed on gem description. Then,

and we can add another copy of the same equation for the return strikes:

Now, as the buildup and return strikes have common factor of b(1+a), we can use distributive property to extract it in the manner of (xc + xd) = x(c+d)

Now, we know that we essentially started out with "x+x" which is more intuitively accepted as "2x" - the common base is now found in the 1s on the right side of the equation. Instead of

we can average this out to represent "average buildup and return strikes' damage bonus", then have a more intuitive "2x for twice the strikes" on the outside:

for the following "average stage bonus when combining buildup and return strikes" table:

where StageMultiplier selects from (9) through (14), as a replacement for 1.85 in the 6-stages example. Moreover, for all levels, the attack speed bonus is 60% more, so dps will always be: