Quick Guide: This article has a quick guide that shows you how to use the Scout Tower strategy to complete a Blighted Map encounter.

This article is a stub. Please help improve the article by expanding it.
For the skill gem, see Blight. 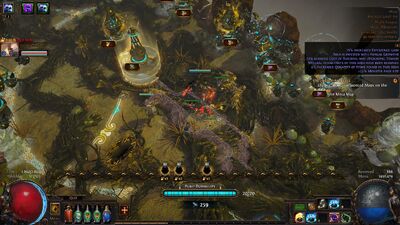 An exile during a Blight encounter

Blights are tower defense-like encounters that can spawn from Fungal Growths. There is around a 8% chance to find a Fungal Growth in any map area, which will always be accompanied by Sister Cassia. The chance can be buffed by atlas passive skills. 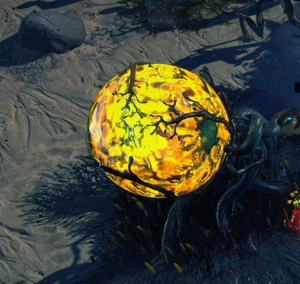 Once players interact with the Fungal Growth, Cassia will place a purification pump on the growth, causing it to spawn roots in random directions. At the end of each root is a portal that spawns enemies that slowly move towards the core, only stopping to attack units in its way. The Blight can spawn up to 8 roots, increasing with zone level. Players will be given a short preparation time before the Blight starts spawning monsters. Players can skip this by pressing the button on the bottom right.

Some roots will spawn after a delay, and sometimes a root will have multiplied monster density (indicated by a multiplier). An icon corresponding to a tower can appear over each root, indicating which tower it is resistant to. Along the paths of the roots, players can construct a tower in specified areas. Towers cost resources to build or upgrade, which is acquired at the start and from killing blighted enemies.

When an enemy reaches the core, it will lower the durability of the pump and despawn itself. The pump has 10 durability, and the amount of durability lowered is based on the monster's rarity (1 for normal, 2 for magic, 5 for rare, 10 for unique). When the pump's durability reaches 0, the Blight encounter fails and monsters will stop spawning.

Once all enemies from each portal are defeated, it will spawn chests at where the portal was. These chests persist even if the pump gets destroyed afterwards. Blights always reward at least one oil or one Blighted map.

Blights were introduced in the Blight league. Characters must complete least 1 blight encounter before Cassia will annoint items.

Blights were the main focus of the temporary Blight leagues. After the leagues ended, Blight was added to the core game, but spawns much less often than in the Blight leagues. By default it is 10% chance.[1]

Occasionally there is Zana crafted mod to force Blight to spawn. The Zana mod also has a hidden property that set the league flag of the map as Blight league,[2] which some of the unique that released in version 3.8, are speculated that they need that league flag to be chanced.

In addition, by allocating Lira Arthain atlas passive Spores on the Wild, that atlas region can drops map that has an enchantment Area contains an additional Blight Encounter. it is not certain that the enchantment is the same as Zana mod or not.

Blighted Map that drops from Blight encounter from normal map, is always contain a very hard version of Blight .

Completing a blighted map or a blight encounter on a regular map will grant many of the following: