View source
BodyswapMovement, Spell, AoE, Fire, Travel
Level: (1-20)
Cost: (8-23) Mana
Cast Time: 0.70 sec
Critical Strike Chance: 6.00%
Effectiveness of Added Damage: 70%Requires Level 10Violently destroys your body and recreates it at the location of a targeted enemy or corpse, dealing spell damage in an area at both locations. If there is no specific target, it will prioritise corpses over enemies. If targeting a corpse, the corpse will also explode, dealing damage around it that is not affected by modifiers to spell damage, and cannot be reflected. This spell cannot be repeated.Per 1% Quality:1Superior2Anomalous3Divergent4Phantasmal0.5% increased Cast Speed5% increased Burning Damage0.5% increased Area of Effect2% increased Damage if not Consuming a CorpseExplosion deals base Fire Damage equal to 6% of the corpse's Maximum Life
This Spell deals (3-154) to (5-231), plus 3% of your maximum Life, as base Fire Damage
300% more Area of Effect if Consuming a corpsePlace into an item socket of the right colour to gain this skill. Right click to remove from a socket. 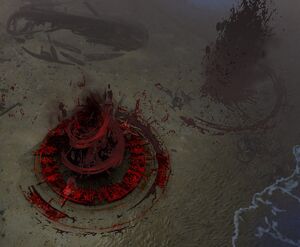 Bodyswap is a spell skill. The skill can target an enemy or a corpse, exploding your body and teleporting you to the target. The skill creates an area of effect explosion that deals fire damage, which scales with your maximum life. When targeting a corpse, it deals more damage and the corpse also explodes to deal damage relative to the corpse's maximum life.