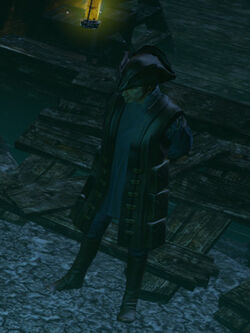 Captain Fairgraves is an NPC found in the Ship Graveyard act 1 and the Docks act 3.

Frankly I would've been surprised if you hadn't recognised me. Yes, tis I, Captain Sigmund Fairgraves, Wave Tamer, Piratebane, and conveyor of civilisation to barbaric lands. So what am I doing here, apart from blowing my own bugle? I'm marooned. Languishing, thanks to a pair of pretty blue eyes.

Stuck fast in the filthy mud of Wraeclast, thanks to one sultry little slave girl. I liberated her from the flesh pits of Trarthus and she repaid me in full, with sleight of hand and swift feet. Turned the coat of my first mate, took my hard-earned Allflame, and with it the wind out of my sails. Find my Allflame, I beg of you. Until I feel its warmth again, I'm trapped here, high and dry until the sun's final setting.

I hunted the vagaries of a near-forgotten myth to a shattered cathedral in the inner Empire. I took the Allflame and encased it within a lantern of pure silver...the only element it seemed incapable of consuming. Oh, the Allflame does many a marvellous thing in the hands of one who knows how to harness its power. Banish any thoughts of using it for yourself. It would burn you alive.

This dialogue only enabled after the player return to town and talk to the NPCs about Fairgraves:

So, you take me for a phantom? Or perhaps a charlatan with most unusual working conditions? I assure you, I am neither. The Allflame has bestowed a unique gift upon me. Return it, and a small portion of that gift will be yours.

My loveliest neighbour in this most salubrious of neighbourhoods. Facing Merveil and finding my Allflame are two mutually exclusive endeavours. I'd much prefer you to live to see your errand fulfilled. Although, it is possible that my wayward slave girl fell prey to one of Merveil's slithering progeny. If that be the case, you look resourceful enough to handle a tentacled wench or two. But if Merveil herself has my flame, be very wary. That necklace of hers provides the old siren with some subtle wiles indeed.

If the history books are to be believed, Daresso the Daring presented the necklace to Merveil on bended knee. And from the moment he placed that little chunk of Wraeclast at her throat, Merveil began to sing. It's told her sweet voice grew to fill even the largest concert halls of Oriath, and brought warmth to even the coldest of hearts. But then she began to change. Her mind and body twisted, as did her songs. The sweetness remained while the sanity fled. Knowing what little I do about the powers that lie dormant here in Wraeclast, I'd surmise that if you have Merveil's necklace, you have the Siren's voice.

After turning in the Allflame

Oh, you want your moment in the firelight now, do you? Unfortunately, necessity is what it is, and for the Allflame to give life it must first be kindled with life. And since suitable kindling is in short supply around these parts, I have little option but to make do with what I have.

Please understand that as a gentleman of honour, it pains me greatly to do this. Hard times call for hard hearts. I'm sure, were the circumstances reversed, you'd do precisely the same.

Now there's a familiar face! Before you say anything... yes, I did try to kill you. Inexcusable! I allowed pragmatism to overcome honour in a moment of desperation. Please accept my deepest apologies and... what do you say? Can the two of us make a fresh start? Marvellous! Now, as you've clearly noticed, the Allflame has given me another respite from oblivion. Alas, it's a partial success only. I am neither man nor spirit, living nor dead. A state that comes with some rather frustrating restrictions. I know we've only just been reacquainted but to put no finer point on it, I... I need your help.

A Swig of Hope

Interested are we? Oh, splendid! In return, I have a gift or two that I may bestow upon you with a click of my translucent fingers. All you need to do is furnish me with a crystal decanted and a juicy piece of fruit, two items that remain agonizingly out of reach for a man in my... peculiar situation.

I'm sure you've heard of Malachai by now? Ever the heterodox, he often sought otherworldly inspiration by imbibing a substance called 'Ghost Wine'. For the purpose, he created the Decanter Spiritus. I found it on my last visit here. Liquid placed in this crystal decanter becomes quasi-apparitional in nature. I'm sure you can glean the Decanter's usefulness to me. Conventional liquids simply don't hit the spot. I am one sorely parched revenant. I hid the Decanter Spiritus in the Marketplace so as not to cause temptation for the less morally steadfast in my crew. Look to the carven heraldry here and find a lion dancing upon the waves.

Emperor Chitus was stabbed in the posterior by his own Lord Mayor on the eve of the Purity Rebellion. Chitus' grieving gemlings buried him in The Imperial Gardens and a plum tree was planted upon his resting place, so that his mourners might taste his glory for years to come. I found that tree, and one of my men tasted its fruit. I've never seen so much agony crammed into such a brief moment. This... may seem a peculiar request but please bring me one of Chitus' Plums.

This current form comes with rather frustrating restrictions. It's a small improvement upon my last incarnation, but I'm a man who used to poke his sticky beak into the farthest corner of the world. Now i can barely cross the road. It was no mean feat getting here from Siren's Cove, I can tell you! So here's the truth of it, I intend to sup upon mine own death. Oh, fear not. The Allflame will resurrect me and - with luck - will restore my full freedom. But, for that to happen I must die, and in such a manner as to excite the Allflame to utmost ferocity. I am convinced that only the fruit of Chitus can provide a demise of sufficient tragedy. Life is full of painful choices, is it not?

I visited Sarn some thirty off years ago. Those ghasts, the Undying you call them, scurried up from the sewers near the river and slaughtered all but a few of my most stalwart lads. Oh they're a foul parody of humanity, those Undying. Nothing in common with a fine, upstanding revenant like myself.

Look at the sheen on that plum. Is it not the most delectable fruit that you've ever seen? No? Perhaps the gloss of hope is for my eyes only.

Wondrous! Nothing bonds two souls more soundly than murder. For that reason alone, I knew you could be relied upon.

Now, for a little amateur vintnering. A quick squeeze of the plum like so into the decanter... oh my, look how it transmutes the juice so swiftly. From material to spectral. Effortless. And what an aroma! Imminent death never smelled so sweet. I believe I shall call this fine concoction 'The Imperial Nightcap'.

Now, before I get too carried away, there's the small matter of your recompense.

A toast, to swift endings and promising new beginnings. Oh, and you might want to avert your gaze once I have quaffed this diabolical brew. I doubt that my return to solidarity will be a pretty one.

Right! As I used to say in the love dens of Trarthus... bottoms up, girls!