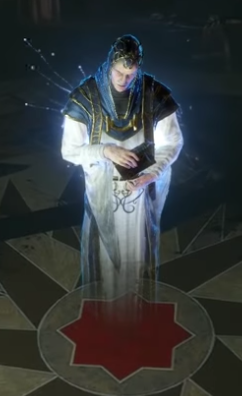 Cavas was a major ally NPC in the Synthesis league. Currently, there is no way to encounter him, except as a non-targetable hostile boss encounter in synthesis unique maps. His true identity is High Templar Venarius.

Above table only listed the loot from finishing

CortexCortex
Relic Chambers MapMap Level: 83
Map Tier: 9
Item Quantity: +100%
Monster Pack Size: +25%100% increased Experience gain
Monster Level: 83
Map has (3-5) additional random Modifiers
Map has (2-4) additional Synthesis Global ModifiersThough my life is gone, my purpose is not.
My will remains, emboldened and empowered by the righteousness of my cause.Travel to this Map by using it in a personal Map Device. Maps can only be used once.

Replica CortexReplica Cortex
Relic Chambers MapMap Level: 84
Map Tier: 9
Item Quantity: +100%
Monster Pack Size: +25%200% increased Experience gain
Monster Level: 84
Map has (6-8) additional random Modifiers
Map has (4-6) additional Synthesis Global Modifiers"Did nobody think to report that we had acquired some sort of free-floating
Memory? Cease testing and lock this away immediately!"
- Administrator QotraTravel to this Map by using it in a personal Map Device. Maps can only be used once.

and Maven's Invitation: The Feared bosses encounter. In Cortex and Replica Cortex, the unique is a guaranteed drop, but in the invitation fight it is not.

High Templar Venarius was the previous High Templar of Oriath, preceding High Templar Dominus. Scattered memory fragments give piece of his past: even as a child, he knew how corrupt the Templars were and secretly despised them, yet joined their ranks so that he could seize as much power for himself. When the Templars discovered a strange device in an expedition in Wraeclast, Venarius tasked Chief Archon Valdo Caesarius to research the object. Valdo mentioned little of his findings on the device, and once Venarius discovered he had been withholding its secrets, he tortured and publicly shamed him to force him to reveal its secrets, and it wasn't until Venarius threatened to kill his daughter where Valdo agreed.

Venarius and his Templars was led to a portal into a dream world, and into the Elder's prison. The Elder asks Venarius to pull the sword sealing his body in exchange for power. Venarius agreed to the deal, and pulled the sword out of the Elder's chest, releasing it into the Atlas once again. It was assumed Venarius was wiped out by the Elder shortly after, but in truth he survived. In the Synthesis league, he is but a wandering spirit with no memory of his past.

Conquerors of the Atlas expansion

In the Epilogue questline of the Conquerors of the Atlas expansion, Officer Kirac and the player visits the Vault of Venarius in the Haunted Reliquary, which contained another map device needed to reopen the way into the Atlas.

According to The Last to Die, the only version of Wraeclast she's been to that had survived the Scourge was a world dominated by "the shade of High Templar Venarius." She doesn't seem to believe that going there to ask for help would be a good idea.

Even shattered as I am, I know that memories floating around like this is not... normal. I believe something terrible has happened to me.

What if other men fall victim? What if mothers forget their children? What if... what if the children are left alone and scared to fend for themselves in a world of nightmare... Exile, can you fathom the horror?

I remember nothing at all, save the flash of the sun on my mortal skin in a dream. I was a living man. I know I was. Ask me again when we have retrieved further memories, and I shall hopefully have more to tell you.

I was... a good man! I fought for God. I remember saying so. That symbol... the Descry... it stirs my half-remembered blood to think of it. I wanted to do good things. Important things. Can you imagine finding the truth of oneself on the wrong side of morality? I have thought long on this fearful notion... but now I know, exile, and that relieves me. I am no longer afraid to recover more of my memories.

I'm certain now that I was a Templar. Yes, I remember watching their mighty parades through Oriath Square as a child, and I can still feel that sense of satisfaction the day I truly donned the mantle. All of the pain and sacrifice was worth it, to do good, to protect mankind... to protect the children...

I was a Templar, yes, but now I remember that I secretly despised them. I understood that they were a diseased organization prone to brutal oppression. Friend, was I exiled as well? I cannot imagine my resentment would have gone over well with my superiors. Maybe I kept my thoughts to myself and lived a life of quiet desperation, but I feel like I was the kind of man to act.

So what did I do?

Exile, there is something about all this that I cannot fathom. The memories I somewhat understand. A man's thoughts, a woman's remembrance, a child's sorrow - these things come from the living, or the once-living. They are real. But the ancient bridges that you cross between memories? Those were already out there. They came from no man, woman, or child of our land.

I suspect those pathways are not made of the iron we think we see. To dwell on their origins or true nature could send one over the brink, I suspect!

These are memories, yes, but they are also real in a sense. We feel pain within them. We find real material objects within them. Yet some of these objects are not quite right. It is as though they are stuck, half-remembered.

There's a device in the Nexus that seems attuned to such objects. It seems to draw upon their properties to create something new. Its creator must have been seeking something very important in his or her past... I wonder if they ever found it.

Somewhere during map tier 5 one cavas memory fragment leads to The Templar Laboratory but in the past. There are three men there and following dialogue happens.

Cavas: "I recognise these men! That's High Templar Venarius with his guards. The other man is Valdo Caeserius. A man of science. They are building something together. Something important."

Venarius attacks Cavas and somewhere in the middle of following dialogues, enemies start to appear and attack the exile.

Cavas: "That can't be right. Venarius was - is - a - good man. He would not lash out like that. No he must have been provoked."

Cavas: "Valdo is shoulting at him, you see? Threatening him. The High Templar has no choice!"

Cavas: "Oh, dear! What just happened? Was that... because of me?

Zana: "Apologies for the intrusion, Exile, but when we found my father's memory fragment, I thought we could explore it with Cavas' help... Now I know what a mistake that would have been. Cavas has altered this memory and he has likely been altering many others..

Zana: "Of course they do. You've made sure of that. You're no stranger to rewriting history... High Templar"

Venarius: "... And I found it. Yes, this is a start. This is more than I possibly could have hoped for when I drew the blade and awoke -- yes, of course! Now I can protect Wraeclast properly."

Venarius: "Demons, child. Countless. They watch us from the darkness. They claw at the thin veil that keeps our world separated from theirs. A great tide of evil that wishes only to crash down upon us and sweep our civilisation into oblivion. But I will stand against it."

Zana: "Then we're on the same side. The entity that fed on your memories is doing the same thing to my father. Help us stop it!"

Venrarius: "Oh, little one, it is you who will help me... Your memories will show what I need them to show, for the cause. Every thinking man and woman of Wraeclast will come to simply know that they must unite... under me. It is the only way to guarantee a unified defence."