View source
Detonate DeadSpell, AoE, Fire
Level: (1-20)
Cost: (5-20) Mana
Cast Time: 0.60 sec
Critical Strike Chance: 6.00%
Effectiveness of Added Damage: 160%
Radius: 22Targets a corpse, and deals spell damage to enemies around the corpse, as well as causing the corpse to explode, dealing fire damage. The explosion is not affected by modifiers to spell damage and cannot be reflected.Per 1% Quality:1Superior0.5% increased Cast SpeedExplosion deals base Fire Damage equal to 6% of the corpse's Maximum Life
Deals (15-798) to (22-1197) Fire Damage
+(0-4) to radiusPlace into an item socket of the right colour to gain this skill. Right click to remove from a socket. 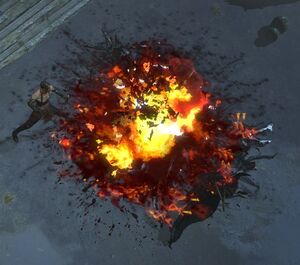 Detonate Dead is a spell that explodes a corpse, dealing secondary damage as fire in an area around it.