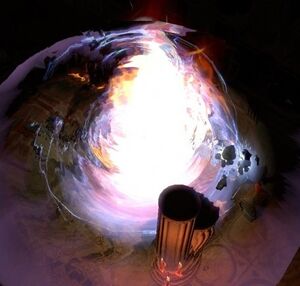 Discharge is a spell that consumes all of the player's charges (specifically frenzy charges, power charges and endurance charges) to deal elemental damage per charge consumed in an area around them.

gem gives a chance to gain only one power charge after every cast, regardless of the number of monsters hit.

The following enchantments can only be found on legacy items in permanent leagues: