Dusk, Harbinger of Lunaris is a unique monster located in The Lunaris Temple Level 2 in Act 8.

Since the area is largely the same as The Lunaris Temple Level 2 (Act 3), the boss use the same boss room as Piety fight in Act 3. 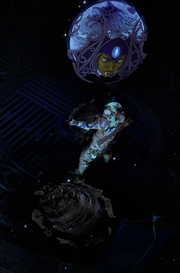 Dusk, Harbinger of Lunaris, covered in Ash and Lunaris, Eternal Moon, in Celestial Form, and a Dark Vortex on the foreground.

The boss use a bow that resemble to

. The basic attack of the boss fires two arrows at the same time.

An orb that suspended in the centre of the arena (which actually is Lunaris, Eternal Moon in her Celestial Form), would occasionally cast a vortex, standing on the vortex would inflict a debuff called Dark Vortex.