From Path of Exile Wiki
Jump to: navigation, search
Keystone

Enemies you hit with Elemental Damage temporarily get +25% Resistance to those Elements and -50% Resistance to other Elements [1]
Balance is good in all things, but especially in the realm of magic.

Elemental Equilibrium (often referred to as EE) is a keystone passive skill which changes the resistance of any monster you hit with elemental damage (fire damage, lightning damage and cold damage), increasing resistance to the element you hit with by 25% but reducing other elemental resistances by 50%. Multiple EE strikes will overwrite each other. The effect lasts 5 seconds or until being overwritten.

Only a hit that deals damage will apply these resistance modifiers. Blocked hits or hits with no damage (e.g. while having Ancestral Bond) will not trigger Elemental Equilibrium.

If you hit an enemy with two different elements at the same time it will give -50% Resistance to third element and +25% to both elements used. A hit carrying all three elements types will give +25% to all elemental Resistances.[1]

Multiple attacks that hit simultaneously are still processed independently, so the first hit that is processed will trigger EE that affects the other hits.[3]

As long as you are careful to not use the same element twice in a row, EE can greatly boost damage. Try to use a combination of skills that alternate between two elements, or cycles through all three: 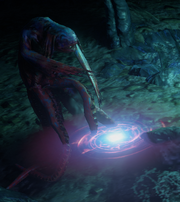 Elemental Equilibrium is located in the centre of the tree, just above the Scion's starting area.

The following base items are related to Elemental Equilibrium:

The following unique items are related to Elemental Equilibrium: