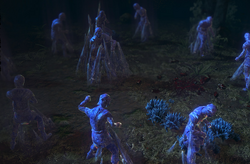 Encounter groups of monsters trapped by an ancient force, break them out to steal their Essence then use these to craft powerful items.

The Essence league and Hardcore Essence league were past challenge leagues. The leagues started along with the release of Atlas of Worlds expansion (version 2.4.0). There were 40 optional challenges, and players were rewarded with Essence-themed microtransactions after finishing 12, 24, and 36 challenges.

In this league, zones contained a pack of frozen monsters which held an Essence, where taking it freed the monsters imbued with its power. Essences can be used to modify items with a specified guaranteed affix, some of which are exclusive to Essences. Essences can be traded to vendors for higher tiers and can even be corrupted for a chance to gain an even stronger Essence or destroy it.

At the end of the leagues, all characters and stashes were moved to Standard league and Hardcore league. Characters that died in the Hardcore Essence league were immediately moved to the permanent Standard league.

From the 19th challenge onwards and every third challenge after that, the player received pieces of a Essence Totem Pole decoration to display in the player's hideout. The Totem Pole permanently showcases how many challenges the player completed during this league.

Players encounter groups of monsters with a rare one in the middle possessed by one or more essences, each granting him a special ability. These monsters are trapped and don't perform any actions until the player clicks a few times on the possessed rare to release the whole group. When the possesed monster is killed the essences will drop as items.

Essence league had no league-specific uniques.

Cite error: <ref> tag with name "The Essence League Challenges and Rewards" defined in <references> is not used in prior text.
Community content is available under CC BY-NC-SA 3.0 unless otherwise noted.
Advertisement