Fenumal Plagued Arachnid or known as FPA is a type of beast, that can be used to "split" rare items into two. It always appears and captures as a red beast and as a rare monster. Using this beast on items is typically called "beast splitting" an item.

It works in a somewhat similar fashion as

Warning: Using a Fenumal Plagued Arachnid to split an item will result in the Split tag being added to both items, preventing you from making further copies of either item, unless a 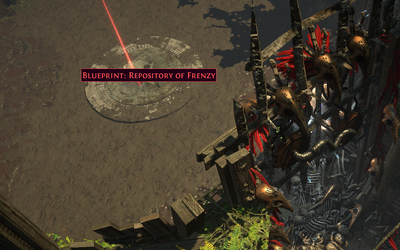 A copy of a Grand Heist Blueprint (which has half of the original explicit mods) generated using Beast Splitting (screenshot taken before ver. 3.14)

Beastcrafting Recipe: Split an Item Into Two, With Half the Mods on Each Item

Since version 3.14.0, beast splitting an item adds the "Split" tag to both items (similar to "Mirrored" tag), which prevents the items from being split or fractured again. Split items cannot be split again, and cannot have Imprints made of them or applied to them. However the item can still be mirrored using a

According to a datamined list, the minimum Map level required to capture a Fenumal Plagued Arachnid was map Level 70 (during Bestiary league).[1]

In Bestiary, the classification of Fenumal Plagued Arachnid is as follow: