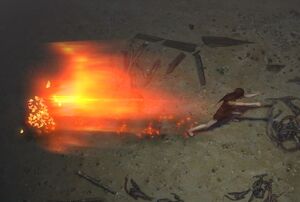 Flame Dash is a movement spell that causes the player to teleport to a target location, damaging enemies and leaving a trail of burning ground.

The following base items are related to Flame Dash:

The following unique items are related to Flame Dash: