View source
Freezing PulseSpell, Projectile, Cold
Level: (1-20)
Cost: (5-21) Mana
Cast Time: 0.65 sec
Critical Strike Chance: 6.00%
Effectiveness of Added Damage: 200%
Projectile Speed: 1800An icy projectile which has a chance to freeze enemies it passes through. The projectile fades quickly, reducing damage and freezing chance until it dissipates.Per 1% Quality:1Superior2Anomalous3Divergent2% increased Projectile SpeedProjectiles gain Damage over time, dealing up to 3% more Damage by the time they dissipate
Deals 99% of DamageCannot Pierce EnemiesDeals (8-888) to (12-1332) Cold Damage
Projectiles Pierce all Targets
Projectiles lose Damage over time, dealing up to 50% less Damage by the time they dissipate
Projectiles have 25% chance to Freeze, which is lost over the first quarter of their flight
(0-19)% increased Projectile SpeedPlace into an item socket of the right colour to gain this skill. Right click to remove from a socket. 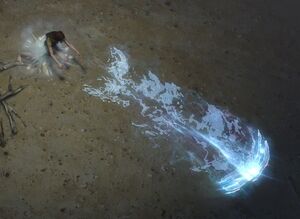 Freezing Pulse is a spell skill which launches a dissipating projectile that deals cold damage and pierces all targes. The projectile has an extra chance to freeze which is lost over a short distance.

Cite error: <ref> tag with name "FreezingChance" defined in <references> is not used in prior text.
Русский
Community content is available under CC BY-NC-SA 3.0 unless otherwise noted.
Advertisement