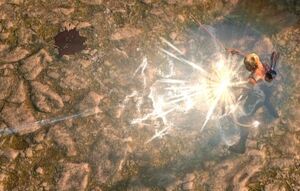 Galvanic Arrow is a ranged bow attack skill that fires arrows which deals lightning damage in an area of effect cone. The arrows have a short range, but it can be extended with increased projectile speed, which also increases the AoE.

) will affect the cone but not the arrow damage. The cone and arrow deal damage independent of each other, effectively doubling damage dealt to monsters directly in the line of fire.

Galvanic Arrow shoots a lightning cone each time you shoot your bow. Barrage Support makes your projectiles fire sequentially instead of simultaneously, meaning a lightning cone is triggered for each projectile shot during your attack.

The following unique items are related to Galvanic Arrow: