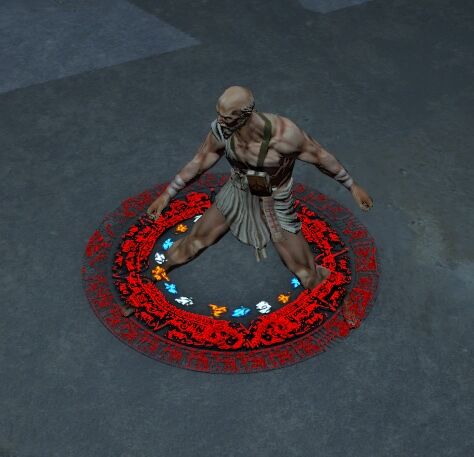 For the non-Vaal counterpart, see Purity of Elements.

Gluttony of Elements is a temporary aura that causes taking elemental damage to instead heal the caster and nearby allies. It can be obtained by equipping

Blood of CorruptionBlood of Corruption
Amber AmuletRequires Level 20+(20-30) to StrengthGrants Level 10 Gluttony of Elements Skill
Adds 19 to 43 Chaos Damage to Attacks
-(10-5)% to all Elemental Resistances
+(17-29)% to Chaos Resistance
CorruptedIn my dream, a voice spoke to me. It said:
'My reach knows no bounds.
All that is pure is destined to rot.
All that lives is destined to serve.'
- Doryani, Queen's Thaumaturgist

, which grants the level 10 version of this skill. It is currently unknown what effect the level of the skill has on its effect and why the amulet doesn't grant a level 1 skill.

The skill functions identical to a Vaal skill and is affected by passive skills and items that specifically affect Vaal skills.

Like other Vaal auras, Gluttony of Elements is affected by duration modifiers such as #% increased Skill Effect Duration.

Gluttony of Elements prevents all players affected by the aura from gaining Vaal souls.

Lead developer Chris Wilson has stated that the original name for the skill was Vaal Purity of Elements, but that it was changed to avoid suggesting that it could be obtained by corrupting the skill gem itself.[1]