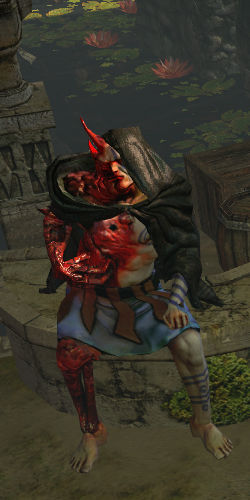 Grigor, a mutilated man, is an NPC that can be found near the water in The Sarn Encampment in act 3.

Come no closer, Witch. The name’s Grigor and, as you can see, I’ve had my fill of your kind.

So once you've finished admiring your sisterhood’s handiwork, turn those icy orbs of your eastward.

Yes, you’ve brought Clarissa home to us, and once again she pesters me with pity. There’s only so much broth, so many bouquets that a man can take. For a criminal, Clarissa has a strangely soft centre.

Still, I’d rather not see that heart of hers hardened. Use those dubious talents of yours for something worthwhile. Find her boy-mate, Tolman. Prove me wrong about your kind.

Death came to town.
The roaring Ezomytes wore red.
The red of blood,
The red of the fray.


Death came to town.
The silent Ezomytes wore grey
The grey of twilight.
The grey of decay.


Only the isles of Skoathe were spared. One a backwater of my proud civilization, now... all that remains of the Ezomytes.

Listen carefully, Witch. Thanks to your sister-in-art, Piety, I no longer dream when I sleep. I only have nightmares. The same nightmare, over and over. The Mirror. It’s never my reflection looking back.

The first time that mirror appeared to me, it was Kole I saw. A rapist from Oriath I had the displeasure of sharing a pen with in Gravicius’ stockade. Piety took him for her experiments and that night, I saw her handiwork while I slept.

This time it was Tolman. Flesh dried to leather. Organs shrunk to husks. Blood trickling through his skeleton like red dust in an hourglass. It’s Piety’s gift to me, that mirror. At least I won’t be seeing Clarissa the next time I look into it. And for that alone, I hope it’s not you I see, either.

I walked halfway across this forsaken continent because of an ode. Of Jewels and Eternity, it's called.

For twinkled promises
Of jewels and eternity,
The Gemling Queen gave her heart
And body
To the King of Shades
For one more day in the sun,
The last day in the sun.


That's but a portion of the full epic. "The Gemling Queen" lived, and she's the enigma behind the fall of the Ezomytes and the eternals both. Look to the Solaris Temple to the north-east. Find the Gemling Queen's remains before Piety does... and destroy them.

Maramoa's sure of herself, and that kind of surety gets you killed in Sarn. You and all those around you. Hargan's got the right idea. Don't believe in anything you can't trade or eat.

I wouldn't rely on Hargan in a fight, and I wouldn't put too much faith in what he says, but he has one highly useful asset: his obsession with self-preservation. If Hargan deems you of use in keeping his fat self alive, he'll do almost anything for you.

Victario, a fellow warrior of words. He wrote many entreaties to the Ezomytes, begging our assistance in helping High Templar Voll despose Emperor Chitus.

That was centuries ago. Victario’s words held much power then. I imagine they still do.

I tried to penetrate the Solaris Temple in the north-east. Almost got myself killed by the bloody Ribbons that guard the place. Bizarre floating tapestries they are, creatures of cloth and thaumaturgy. Fortunately, a few legionnaires got in the way. While the Ribbons eviscerated them, I ran... straight into Gravicius.

He dragged me over the bridge, to the Lunaris Temple in the west, and put me in Piety's "tender care". Didn't say a single word to me the whole time. I was nothing but a spoil of war to him.

You've been busy. With the spool back where it belongs, the Ribbons should be able to keep the Ebony Legion at bay. We've both seen what they can do to a man.

Whether you were saving your own skin or thinking of others, it matters little to me. You succeeded where I did not. You have stood in the presence of the Gemling queen. I can hope only to meet her in my nightmares.

The Eternals revered Sun and Moon as the two eyes of their God. The right eye, Judging Solaris. The left eye, Merciful Lunaris. I can’t imagine that God being overly merciful when She finds out what Piety’s been doing in Her temple.

Unfortunately, Piety was simply a puppet of a greater force. You’ve cut the strings but the master remains: Dominus.

That key you’ve picked up, I heard the Blackguards talk of it. It’s the one key to the Sceptre of God, on the northern edge of the Blackguard encampment. Only Piety was permitted to carry it.

Dominus accessed his laboratory at the summit of the tower via a pulley system rigged to the outside wall. That way will be barred to you, and I heard of no-one, not even Piety, going in or coming out of the lower levels.

Go with care, exile. I can’t imagine what’s inside that tower if even Piety and Dominus feared to tread its steps.

When Piety was... experimenting on me, my consciousness was mercifully fleeting. In those moments of numbing darkness, I met a presence.

Intelligence, power, immensity beyond the limits of my pitiable moral senses. To this creature, I was but a rain drip falling into the sea.

I heard Piety speak to her lackeys of 'The Beast'. It is the source of her thaumaturgy, and the object of her ambitions. I believe Piety's 'Beast' and the dark entity are are one and the same.