View source
Infernal BlowAttack, AoE, Melee, Strike, Fire, Duration
Level: (1-20)
Cost: 6 Mana
Attack Damage: (103-133)% of base
Effectiveness of Added Damage: (104-133)%
Radius: 15Requires Level 12Attacks with your weapon, applying a charged debuff to enemies hit by your strike, and an uncharged debuff to any other enemies hit. Upon reaching 6 charges, expiring, or the enemy's death, the charged debuff is removed, and it deals damage to that and other nearby enemies. Enemies with either debuff explode when they die, damaging other nearby enemies. Damage from this explosion cannot be reflected. Requires a Sword, Axe, Mace, Sceptre, Staff or Unarmed.Per 1% Quality:1Superior2Anomalous3Divergent4Phantasmal0.5% increased Area of EffectExplosion has 1% chance to apply Uncharged Debuff on Hit3% increased Burning Damage
1% chance to Ignite enemies4% increased Skill Effect DurationDeals (103.9-133)% of Base Attack Damage
60% of Physical Damage Converted to Fire Damage
Base duration is 0.8 seconds
Explosion deals base Fire Damage equal to 6% of the corpse's Maximum Life
Debuff deals 66% of Damage per Charge
(5-75) to (8-113) Added Fire Damage
+(0-2) to Melee Strike RangePlace into an item socket of the right colour to gain this skill. Right click to remove from a socket. 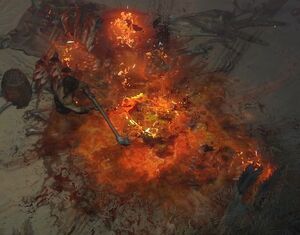 Infernal Blow is a melee attack skill that converts 60% of Physical Damage to Fire Damage, applying a special debuff to enemies. When the debuff reaches six charges, expires, or the enemy affected by the debuff dies, it releases an explosion that deals fire damage to nearby enemies. This skill requires a sword, axe, mace, staff or unarmed.

Duration: If the debuff caused by Infernal Blow is still active when the monster dies, it will explode even if Infernal Blow was not the killing blow. That makes this skill very effective with Melee Splash or Ancestral Cry.

Debuffs: When the attack made with Infernal Blow hits an enemy, it applies two debuffs: the first debuff can stack up to six times and creates an explosion that deals damage based on your weapon damage when it reaches full charges or when it expires. The second debuff causes the enemy to create an explosion that deals damage scaling with its maximum life when it dies.

Explosion: The corpse explosion deals fire secondary damage in an area and cannot be reflected. It is neither an attack nor a spell, so in particular it is not affected by modifiers to melee damage, weapon damage or spell damage, but is affected by Elemental Damage with Attack Skills. While in a party, the explosion ignores the increased life added for each player beyond the first and treats the monster's life as if you were solo.[1]

Area of effect modifiers will only apply to the explosion itself, not the melee attack.