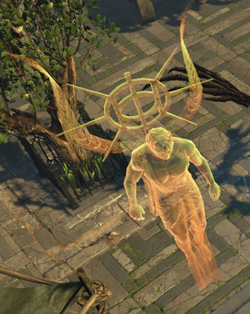 Innocence appears as an NPC in the Oriath Docks in Act 10, and Oriath in the Epilogue.

A woman gave birth to two boys, Innocence and Sin. Innocence had an honest and pure heart. Sin was disobedient and he lied. When their mother broke the bread, she allowed Innocence to eat his fill, as a reward of his honest nature. Sin was cast the scraps to remind him of his bad behaviour. One day, Sin stole a fish, and beat his brother until he promised not to tell it to anyone. But Innocence could not keep his promise, and bore witness to the Mother of Two. It was decided that only the purification can cleanse Sin's corruption. So their village burned Sin, to purify him. While Sin became ash and smoke, he moved into the watching people. Sin forced the people turn on each other, and destroy themselves. "As town and titan burned, the sky turned dark with the ash of Sin. There, amongst the raging ruins of his home, Innocence swore an oath. No matter where the ashes of Sin fell, his purifying flames would rise to meet them."[1]

Following the death of his first mortal vessel, High Templar Avarius, Sin had saved his soul and placed him within his new host, Bannon. His godhood was returned to him with The Staff of Purity, at the cost of Bannon's life. Having retaught humanity and penance, he allies with his brother to defeat Kitava and save humanity.

(Both Sin and Innocence are speaking.)

Innocence: I am reborn! A new god in a troubled land...

Sin: Brother! You have seen better days, I am sure, but for now, you must rouse yourself. We have work to do. If ever you wish to make right the wrongs of your past, help me now, as once i asked you in the early days of mankind. Do this for me, and I shall consider our quarrel to be at it's end.

(Both Sin and Innocence speak.)

Innocence: Little brother... Please, forgive me. It's as if I have been dreaming the most horrid nightmare... and now, at last, the haze of sleep lifts from my eyes. My vision is clear... oh, by the gods, forgive me...

Sin: It is as true now as it was when we began. You and I are of the same flesh, cleaved from the same womb. You ask for my forgiveness. I give it to you freely.

Sin: There will be time for all of that later, but for now, your people need you. Oriath needs you...

Innocence: ...No. I cannot remain here amongst these ruins. Amongst the corpses of my own making... These people, they need you, brother, and your hero - not me.

Sin: Then what? Where will you go? What will you do?

Innocence: Isolation. I shall go south. As far south as one can travel in such a fleshly form. There are things I must think on, a redemption I need plan, if my conscience decides I am worth of such a gift.

Sin: You would seek forgiveness in the ice at the bottom of the world?

Innocence: I would, should you let me.

Sin: Go. Seek out that which you need. Find who you are, make pilgrimage. Journey on your path, brother, only return to us one day.

You have heard my admission of guilt and my plea for forgiveness, yet I sense in the glowing embers of your eyes that you will be glad to be rid of me. I don't blame you, mortal, nor do I begrudge you for your continual anger. The sins I've commited, although bad enough, are made worse by the lens of pride I once viewed this world though.

I agree with your judgement, and though I wish never to return from my banishment, I have made promise to Sin that I shall one day rejoin this world.

But until that day I will remain in the furthest south, in a place of ice and ash, of blistering seas and abysmal storms. I shall meditate on my wrong doings, until a way of making amends to the millions of lives I have murdered and ruined, reveals itself to me.