From Path of Exile Wiki
Jump to: navigation, search
Inspired Learning
Crimson JewelRadius: Small (800)With 4 Notables Allocated in Radius, When you Kill a Rare monster, you gain 1 of its Modifiers for 20 secondsIf you do not learn from a won battle
then you have already lost the war.Place into an allocated Jewel Socket on the Passive Skill Tree. Right click to remove from the Socket. 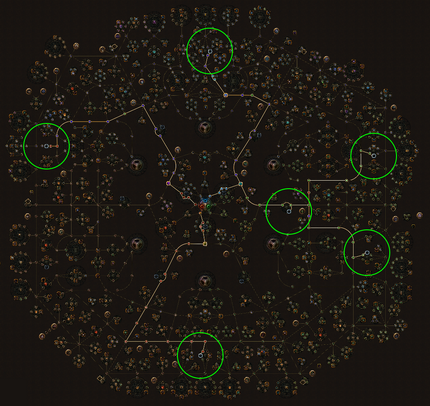 Inspired Learning jewel sockets in Path of Exile 3.13.1. Green circles denote the small radius around the jewel socket. Notice how at least 4 notable skills are within each radius.

Inspired Learning is a unique

Crimson JewelCrimson JewelPlace into an allocated Jewel Socket on the Passive Skill Tree. Right click to remove from the Socket.

, which provides the ability to gain one mod from a slain rare enemy. It can be considered a low-power version of the

, which provides the ability to gain all monster modifiers from a slain rare enemy.

Warning: The Inspired Learning jewel will only activate if it is placed in one of jewel sockets shown in the image.

Upon killing a rare monster, the character gains one of its modifiers for the next 20 seconds.

The following modifiers can not be gained by characters:

Inspired Learning will not work socketed in Cluster Jewels. There are 6 sockets in which Inspired Learning can be placed: the socket near each of the Duelist, Ranger, Shadow, Templar, and Witch start locations and one near the Perfect Agony Keystone.

Note: It is not possible to gain any "negative" mods from enemies such as curses or hexes. Mods gained will always have a positive effect either to improve the player's defense or offensive capability.