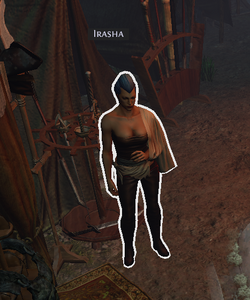 Irasha is an NPC located in Highgate in Act 9, standing next to Petarus and Vanja. She acts as a Vendor for armours and weapons.

You must be the outsider, the "Beast Killer". I am Irasha, and while our soft-hearted chieftainess is gone wandering, it falls to me to make sure this akhara doesn’t suffer for it.

I've heard the stories they tell of you, and I know better than to pluck the feathers from a sleeping roc. Yet, for the sake of my people, I ask that you keep your peace while among us. Our customs have too often been threatened. Your ways are not our ways. Let's keep it like that.

No matter where you come from, or who you might be, we were all birthed by a mother. Our mothers protected us and gave us nourishment. It is our duty in life to honour that great task. Without a mother, none would tread this dirt today.

The most important commandment in our people's tradition is this: Honour the Mother, Honour the Life.

When I was twelve, three men came out of the Vastiri plains and set their eyes upon me. They asked me for water, but took much more.

When the women of Highgate finally caught them, I was given an opportunity to enact the execution myself, an offer I gladly took. Even at twelve, I knew the price for betraying the akhara.

Tasuni knew Oyun was to perish at the hands of that overreaching bitch, yet he did nothing to save her. Should I ever be in a position to punish such treachery, I shall do so... with pleasure.

Arrogant men always seek to Control that which they should not, as if that dangling piece of meat between their legs is somehow meant to lead them to power and glory.

Men don't have the mind for leadership, Without guidance, they destroy all they touch. Leave the trials of power to women, we who know how to nurture, how to grow, how to protect.

Two of a very few outsiders I’ve met worth a lick of salt.

I'm not saying I think they should have as much sway in the akhara as they do, but the fact is, the people like them. Oyun liked them, and despite their clumsy attempts to adopt some of our traditions, I like them as well.

My head is still reeling from what Kira has done to Oyun. That bitch looked at me day in and day out and proclaimed herself loyal unto death. She has shown her true face in the end.

Once I thought the old gods were worthy of honour, and I can still see how one might think there are boons to be gained courting their favour, but if such favour comes at the price of Maraketh lives, then I spit on the old gods and Kira as well. May they all rot in the endless desert.

I would offer prayers up to the goddess of the breeze as a child, and listen to her voice sing and whisper as she danced through my family's windchimes. She was my favourite, but in light of recent time, I can only believe that some immortal madness has laid waste to her mind.

As a child, my mother told me stories of the old gods, that they were to be feared and venerated, that they embodied the everlasting spirit of the Maraketh people. But this false queen, Garukhan, she was nothing but a goddess of lies.

By accepting Kira’s slaughter of Oyun as a sacrifice of worth, the goddess has played her part in forsaking our most sacred tenet. Honour the Mother, Honour the Life. The bones of our tribe-mother, have been ground into the dust by this divine insanity.

If the old gods can't follow the very traditions they themselves set forth, then how can we? Perhaps the time has come to forge our customs anew, in our image, not those of false and selfish gods.

Through treacherous deeds and blind love, the Gemling Queen has taught us much. Her body remains here, surrounded by flowers, a reminder to all of us that we ought to tread lightly when chasing desire.

Who can say, after all, where the line is drawn between bold ambition and foolish pride?

My dekhara and I have vowed to protect our people, and so we keep our eyes sharp, and our blades even sharper. As such, I have plenty of weapons on hand. If you perhaps needed to replenish your arsenal, I'm sure we can come to an agreement.

Though you showed a mighty bravery when you slew that horrendous Beast, by the thoughtlessness of your actions, you have caused great trouble to fall upon our home. The water runs red with toxic, corrupted blood.

Now our people must travel far to fill their flasks and feed their livestock. It's as if we are in the midst of a great drought, while the water mocks us from within our own village...

There I was, tending to the animals when the ground moved beneath me. It was like the whole earth groaned. in pain, a cry unlike I’ve ever head. The mountain trembled, and for a moment it seemed as if Death was due to visit us, here in Highgate...

I don't know what you did, Outsider, but I hope you did not hurt the Mountain, she is our mother and if a stranger were to wound her, I would slit their throat myself.

Not since the fall of Deshret has this akhara seen so sad a moment. Our gods are false. Our sekhema is dead. But you, Outsider, you offer hope.

Without the feather, Tasuni will be unable to take control of Highgate, no matter how much he lies and whines. My people will never allow it. And Oyun's passing leaves me with only one course of action. I will take the Feather of Sekhema and mount the saddle of Highgate. It will be a difficult journey ahead. Our faith has died with the gods you have slain, yet I know in my heart that we will find a way to go on.

For your troubles, outsider. Perhaps I was wrong, and good can come from beyond our borders.

My poor Oyun... Tell me, exile, did she suffer? No, I don't desire to know. She was a good ruler, wise and benevolent. Our people will miss her, and I shall grieve for her as if she were my own flesh and blood.

But now, Tasuni, with feather in hand, moves to take Highgate for himself. His followers are as blind as he, and so must you be, for it's clear to my eyes that Tasuni desires for but one wish. To rise up as a god.

We have seen our old gods born anew from the sand, flesh and blood where once there was only song and story. Tasuni would turn his weak flesh and watery blood into law and legend. To think that Highgate might fall to the whims of that shriveled cock!

You have brought me grief. Then that is typical of outsiders, is it not?