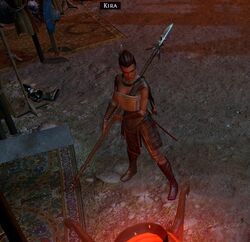 Kira is an NPC that can be found in Highgate in Act 4. She also functions as a vendor of weapons and armour.

She reappeared as a villain in the storyline in Act 9. She, as Kira, Servant of Garukhan, has been affected by the Garukhan, Queen of the Winds, and has betrayed Highgate by kidnapping Oyun to The Quarry.

Sharing some similarities with Greust from Act 2, Kira is a proud warrior who dislikes and strongly distrusts foreigners, only assisting with providing equipment out of a sense of duty.

A descendant of the legendary Sekhema Deshret, Kira is deeply attached to Maraketh tradition, in particular that begun by her ancestor. She is bitterly opposed to Oyun's decision to end the two centuries long isolation of the Maraketh people and accept exiles into the city (Petarus and Vanja being the first ones), and she is even more opposed to the idea of breaking Deshret's Seal and attempting to kill The Beast - convinced that anyone attempting to do that will certainly die and bring doom upon the city.

However, her attachment to tradition also makes her unwaveringly loyal and as a result, deeply conflicted - she constantly voices her frustration with Oyun's decisions and questions her judgement, but fulfills her duties without hesitation nevertheless.

We opened the gates to you for two reasons only. Dominus and Piety. They made themselves our enemies. You made them dead.

Now Oyun believes there is a third reason. The Beast is our enemy. Perhaps you can make it dead as well?

I have seen the look in Piety’s eyes. I see the look in your eyes, Witch. It is not as different as I had hoped.
No matter. The knife in your hand is better than the spear in the rack.

Dominus was High Templar in Oriath, was he not? Your God needs to be more careful when He chooses His servants.
Then again, perhaps He learns from His mistakes. We shall see."

Deshret’s banner flies at the Mine’s entrance and now the darkness gapes, hungry and expectant.

Our Red Sekhema sealed that gate for a reason. Not simply to prevent the Beast from reaching out, but to hinder those fools who would disturb its slumber.

And here you are, about to be swallowed by that darkness. Let us hope the Beast doesn’t notice your passing.

Oyun has ordered me to help you, to trade with you.

I have risked much to gather weapons and armour for this akhara. I’ve scavenged on the fringes of Voll’s encampment, and scouted the Dead City.

Let us see if you can offer any value in return.

I’ve led many a war party against Voll and his unmen, and I’ve seen too many of my dekhara die. I shall look for your return, but I shall not expect it.

Hundreds of our dekhara have fallen to Voll and his legion throughout the years. They died defendind their akhara.

Now Voll is gone, killed by an outsider. You bask in the glory, exile, while I honour the dead.

As we give strength to the outside, we grow weaker on the inside. First, there was Petarus and Vanja. Now there is you.

It shows how little faith Oyun has in us, in her own akhara, that she would treat blackguards and exiles with such admiration.

Oyun is my sekhema, my commander. I am her dekhara, her warrior. I defend this akhara as Oyun sees fit.

Whether Oyun is fit to see what is best for this tribe… it is not for me to say.

My mother gave Tasuni to the gods. The gods gave him back, and I thank them for it, every day.

Deshret lies shackled in the darkness, while I, her blood, am shackled by duty to remain here. Oyun has decreed it.

Will it be you then who frees Deshret from her dishonour? Perhaps you will, perhaps you won’t. Either way, it is Deshret’s fate to suffer at the mercy on injustice.

Deshret has ascend and returned, as we all must, to the dust of Vastiri. The Red Sekhema’s dishonour has passed, and for that, outsider, I will always be grateful.

What does it say of Oyun and her belief in her own blood, our own honour?

Deshret said that to er dekhara on the day she killed Titucius, Scourge of the Maraketh.

I say this of Dialla: When a woman knows nothing of life, howe can she care for the living?

Dialla (after activating the Rapture Device)

The Gemling Queen has given of that black life of hers… for what? To wound and wake the Beast that should have been slaughtered in its sleep.

Dialla’s path would lead us into Cataclysm. Follow your own path from now on.

What cannot be understood should be feared. It is the first rule that a child learns.

There is no shame in my saying this: I fear you, Witch.