Leo, Master of the Arena

View source
Master of the Arena 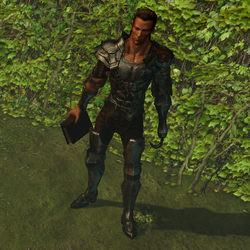 Leo Redmane, Master of the Arena was one of the eight Forsaken Masters. Leo is aligned with player versus player content. Unlike the other masters, he doesn't need to be encountered 'in the wild' first. He resides in the Sarn Encampment by default. He also doesn't count towards the limit of masters in the player's hideout. His vendor reset condition is somewhat different from other masters, as it resets upon accepting his daily quest rather than after finishing the quest.

Orb of RegretOrb of RegretStack Size: 40Grants a passive skill refund pointRight click on this item to use it.
Shift click to unstack.

Orb of ScouringOrb of ScouringStack Size: 30Removes all modifiers from an itemRight click this item then left click on a magic or rare item to apply it.
Shift click to unstack.

The signature mod spawns on amulets, rings and belts with item level 36.

Leo's daily missions involve completing a specific objective in one PvP game-mode (1v1 or Sarn Arena) within your league. His dailies are always the same for everyone across all leagues that day, and can be completed using PvP-only characters.

Possible mission objectives include the following:

Like Zana, Leo does not sell any skill gems.

Leo provides crafting for various kinds of equipment. As you level up, more crafting options will be unlocked. See below for a list.