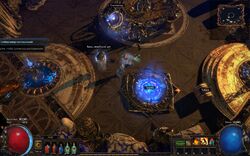 The Memory Nexus is an area found in the Synthesis league. Players can use captured memories here to create paths leading to treasure or enhancement that make memory zones more rewarding.

The Fragmented Memories you've captured in zones are used in the Memory Nexus to create paths. A memory can have two to four paths leading out of it. The path is based on where the Memory Stabilisers were located in the memory. Newly acquired memories will be placed on the queue (shown on the right side of the Memory Nexus map).

You can place memories from your queue or you can move previously placed memories to the Stabiliser. You can also move a placed memory to your queue, but it will remove any Memory Modifiers or Amplifier on it.

You can "pre-place" a memory from your memory inventory by placing it from the Nexus map, but this does not physically place the memory into the Nexus; they will be placed once you interact with the Stabiliser leading into it.

A memory can be entered a certain number of times before it starts to decay. At one charge left, the memory will start decaying once you enter it.

You can right click a Stabilised Memory you've placed to delete it.

In memories that have one charge left, entering it will start the decaying process, similar to fragmented memories found in zones. Falling too deep within the decay will teleport you back to the last Memory Stabiliser or checkpoint you've interacted with. Clicking on a Stabiliser will collapse the memory and transfer all dropped items to that location. In Distant Memory zones, finding the reward will place a checkpoint there and will teleport you to the reward if you fall into the decay.

Decayed zones will persist within the instance until the instance expires or manually removed by right clicking it on the Nexus map or interacting with a Stabiliser leading into it.

Memory fragments can contain zone modifiers like maps. They can have additional modifiers added via two methods: Memory Amplifiers and Memory Modifiers.

Memory Amplifiers grants bonuses to memories placed in that specific grid. Amplifiers are marked with a yellow square in the Nexus map. Up to 10 Amplifiers can be on the Nexus at a time.

Memory Modifiers spawn in Distant Memories like the ones containing treasure. You can use it to add a modifier to a memory square and its adjacent memories. Each Memory can be affected by 5 Memory Modifiers at a time.