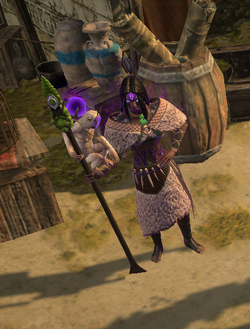 Navali, Hatungo of the Karui [1]

Navali was first rescued by the player at The Climb, then returned to town. She could also be invited to the player's hideout. She would also trade Divination Cards there.

It was possible for Navali to seal prophecies into items for an additional cost of silver. These could then be stored for later or traded with other players.

She was removed from the game in update 3.17.0. She was replaced in player's hideouts by Lilly Roth. According to the devs, "She probably foresaw it coming."

Players could talk to Navali at any act town, or at their hideout, in order to view, seek and seal prophecies. At any time players could have a maximum of 7 active prophecies, as the interface on the right shows.

Thank you for freeing me. The Mother of Death likes to play these little tricks on me. To remind me of my place. But she also sent you here to help.

Let me return the favour, exile. We will meet again in town, and then I will help you illuminate your path.

Is it choice that carries you here, or is it fate? I see a need in you. A need to peer into your future. A need to follow the right path. But your future has already been cast. So open your mind and embrace it.

Long ago, my people called me a Hatungo. A wise woman. Now they call me a revenant. But it is not my fate to return to the Mother of Death just yet. For now I stand with one foot in this world, and the other foot in the realm of the dead. I'm an inquirer of the living and an interpreter of death.

I sense you have questions. For a gift of silver, I will answer them. But you seek more than answers. Riches. Power. These I can also provide, in a way... All you have to do is join me. Heed my words, but walk your path. The future is mine to tell, but yours to claim. It is time to fulfil your prophecy.

And so your path leads you here, exile. Be careful where you step, for as one foot leads the other, so too does each foot leave its mark. A trace of what was. A guide to what will be.

Our paths meet in the shell of a long-dead snail. An empire slow to see where its path was taking it. Built on the husk of another, and destined to be buried time and time again. This city will see great things yet, exile. But not in your lifetime.

Many great things begin at the foot of a mountain, exile. So too do many tragedies. Often a path becomes a fork, and the echoes of your actions push you down one side or the other. Do you know where you are being carried? ...Would you like to?

The Mother of Death watches over this city with great interest. You have joined us just in time. Before you lies a great many paths, each walked by a different life. But each must come to the same end. Eventually.

I travelled here through death's darkened halls, walking the paths of the Remembered. I am but a memory of the woman I was. A memory treasured and sustained by the Mother of Death.

I awoke in the halls of death with the life I once led little more than a dream half-remembered. Yama the White, my furry companion, stood before me with the Seeing Stone he holds now. Both were given a hair of Hinekora's dark knowledge, but each serves a separate purpose.

The Seeing Stone drags me deep into its core, where every instant into eternity is known all at once, like limitless rings on a tree trunk. Yama, like a torch in the mist, guides me back from the stone's infinite visions.

Hinekora, my Mother of Death, is not the only god, exile. The Karui are watched over by many. Ngamahu lends us fire, which illuminates the path. Tawhoa gives us the trees and birds that line the path, so that we may enjoy beauty and peace. Tukohama provides us with weapons and knowledge of war, which lets us walk the path safely.

And in the final days of this world, Kitava, whose hunger knows no bounds, will take it all away.

The tools of divination found on the body of an exile. I have seen it. There are more tools, and the exiles who hold them are gathering in number.

Wraeclast teems with the memories of a violent past. Although the flesh and minds of its original inhabitants are long-gone, their emotions - anger, fear, envy - remain in the artifacts they have left behind.

Doedre Darktongue, Marceus Lioneye, Shavronne of Umbra, Maligaro, Victario. If these names mean nothing to you now, they will soon. Keep an eye out for their long-lost possessions. Each holds the memory of failure, sadness and a desire for revenge.

I have not heard of such a cult, nor have I seen visions of them, but if you say you witnessed their presence in Wraeclast, then I believe you.

Be careful. If they can avoid the gaze of the Seeing Stone then they may be beyond the grasp of even the Mother of Death. And that is truly something to fear.

The fragment you have recovered leads to a very dangerous realm. The Red Queen waits in her dark stronghold, and a thousand years of anger bubble just beneath the surface of her flawless, ill-gotten beauty.

I sense great anger across the land, directed at you. There is another, exiled like you, who wants you dead. For this individual, anger and desperation blur the lines of mortality.

Path of the Thaumaturgist

The great thaumaturgists of the past considered themselves artists of the highest calibre. Their paints were the hidden energies that flow around and through us. Their canvas: the finely-woven fabric of reality itself. And like every great artist, there were times when their brush strokes wavered, when errors were made. Unfortunately, their errors have persisted far longer than their great creations.

Thieves make do with what they can find or take by force. When thieves outnumber their victims, they must look farther and farther for what they can take. It is their own greed that carries them into danger.

The onyx amulet you have begun to reshape is special, and it's metamorphosis is not yet complete. Keep it somewhere safe, for there is more yet to do.

Rats on a sinking ship fight to the death for a splinter of dry wood, not knowing that it too will soon be at the bottom of the sea. We are not the only rats on this ship.

The old red ones left this land barren. Crops grew stunted and disease filled the air. If you don't feed an animal it will soon cast a hungry eye upon its brothers and sisters, and man is no different. The Plaguemaw and his people soon feasted on their own, devouring the very life essence of the young and innocent.

When the rains stopped, the Lord fed his farms with the blood of the beasts. But blood carries corruption with it, and the crops soon towered, monstrous and thorned. In the thick jungle of his own making, it was not only he who turned feral.

Wisdom and knowledge are not one and the same. The queen's thirst for learning was unending. As she tore through the pages of countless tomes, her knowledge grew and her wisdom slipped away, buckling beneath the weight of insanity.

Sometimes death is a thief, quick on its feet and quicker with a blade. Sometimes it is a vine, slowly growing tighter and tighter around your neck. But death is not a toy. The unbreathing queen has raised an army of soulless corpses. Her actions mock death, turning it into little more than an obstacle for her puppetry of the flesh.

Dark minds hide in dark places, but it was not always so.

The wise Red rulers were long-dead, and the strong seized power. But an unwise leader pulls the people towards ruin. So it came to pass that milk fresh from the nipple was soured, grass grew hard and sharp, and flesh walked the earth without a soul. Hinekora cast her net towards the new kings and queens, but four slipped through the holes and fled into darkness. There they remain. Beyond the reach of the Mother of Death. But not beyond her sight.

Too many prophecies remain unfulfilled. Do not risk fracturing your fate.

So you've finally found yourself a dwelling. Perhaps you have room for another lost soul?