From Path of Exile Wiki
Jump to: navigation, search
Int

The Necromancer is an Ascendancy class for the Witch.

The Necromancer is an Ascendancy class themed around the dead and the undead. They are an excellent choice for minion-based builds, having access to minion-enhancing skills, as well as bonuses related to auras and Offering skills. They also have skills based around corpses, gaining powerful bonuses from spawning and consuming corpses, which makes them pair well with corpse-based skills like

Detonate DeadDetonate DeadSpell, AoE, Fire
Radius: 22
Cost: (5-20) Mana
Cast Time: 0.60 sec
Critical Strike Chance: 6.00%
Effectiveness of Added Damage: 160%Requires Level 4Targets a corpse, and deals spell damage to enemies around the corpse, as well as causing the corpse to explode, dealing fire damage. The explosion is not affected by modifiers to spell damage and cannot be reflected.Per 1% Quality:1Superior0.5% increased Cast SpeedExplosion deals base Fire Damage equal to 6% of the corpse's Maximum Life
Deals (15-798) to (22-1197) Fire Damage
+(0-4) to radiusPlace into an item socket of the right colour to gain this skill. Right click to remove from a socket. 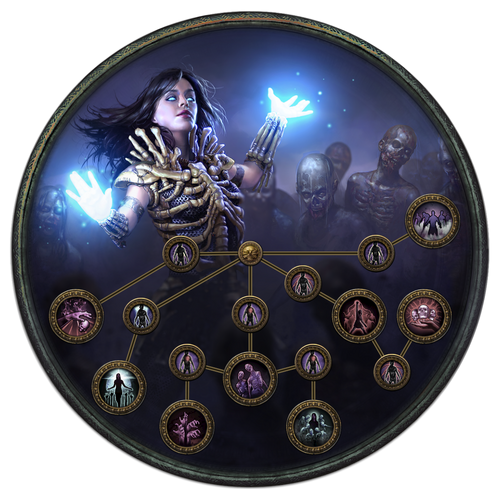 The Necromancer has the following minor passive skills:

The Necromancer has the following notable passive skills: