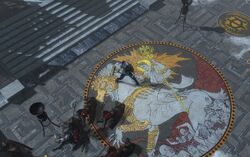 Oriath Square is an area in Act 5. This area has a waypoint and is connected to The Control Blocks and The Templar Courts.

The area consists of a grid of streets around a large plaza containing many Blackguards and strewn with defensive barricades. At its center lies the remains of some trees surrounding a drained fountain. To the east lies a Hideout. North of the plaza is a river and the entrance to the Templar Courts.