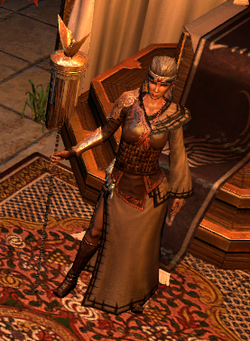 Oyun is an NPC that can be found in Highgate in Act 4, with a significant role in several quests.

Always composed and rational in her behaviour, she is the sekhema - leader - of the Maraketh, who broke with over two centuries of tradition started by Deshret, admitting exiles into Highgate and allowing for the breaking of Deshret's Seal.

Despite strong opposition and criticism of Kira, Deshret's descendant, Oyun decided to end the two centuries long isolation of Highgate and allow exiles into the city (Petarus and Vanja being the first ones) in order to gain knowledge of the outside world, seeing that Dominus' Blackguards have begun attacking the Maraketh.

Oyun also believes that imprisoning The Beast inside the Mines resulted in nothing more than "trading one curse for another", and putting great faith in the help of Tasuni, who is apparently gifted - or cursed - with visions allowing him to understand The Beast, she decided that an outsider, not limited by the ties and ways of the Maraketh, will finally be able to break Deshret's Seal and kill The Beast once and for all.

While we cloak ourselves in tradition and war, you cloak yourself in thaumaturgy and fear, and that is why you will kill the Beast within the mountain. Lady Dialla has told me this.

She has much faith in you, Witch. The question is… can we Maraketh share in her faith?

The Maraketh once stood united under Deshret’s Banner. That was before the plagues, the tempests… the corruption.

Deskret rode here with this akhara, the Kiyato, to put an end to the Beast’s curse. And upon the very threshold of the darkness she faltered.

Perhaps she saw that King Kaom had gone there before her and not returned. Or perhaps the nightmare simply overcame Deshret’s seemingly indomitable courage.

Either way, she chose not to ride into the mountain, to slay the Beast. She closed and sealed the Mines and committed this akhara to Highgate’s guardianship.

The tempests, the plagues… they passed. Of their own accord, or because of Deshret’s seal, we do not know.

But what I do know is this. When Deshret vowed to watch over these Mines, she simply traded one curse for another.

Voll and his ‘unmen’ have dipped their fleshless claws into the lifeblood of the Maraketh since day this akhara tethered its rhoa here.

We read the land, learn its stories. Kaom and his warriors entered those Mines some twenty years before Deshret sealed the Mines and bound our akhara to this mountain.

Neither soil nor stone speak of Kaom’s return. Perhaps he is dead, or perhaps he merely wishes he was. After Voll, anything seems possible.

I am told that you have put King Kaom down to his final rest. Curse-breaker, and now the Murderer of Legends. Great names hatch upon you like ticks on a rhoa.

I was right to have faith in you, Curse-breaker.

You have succeeded where we have failed. You have slain a creature that was thought to live forever in the minds of those who came before you.

Voll, Daresso, Kaom, Deshret… the greatest champions Wraeclast has seen in the last three hundred years. You stood where they fell. Now you are the champion of champions, and Wraeclast should bow at your feet in gratitude.

You certainly have my gratitude, and that of my akhara. We have been exiled from our land by fear and misguided duty. Now we may return, to ride where we will, live how we wish.

Curse-breaker, Giver of Freedom… we thank you.

I will make allies of whomever I deem useful. We have observed the actions of both blackguard and exile, and it is Petarus and Vanja who give meaning to those actions.

This akhara has not mixed with other than its own for over two hundred years. The outside world has now discovered us, so it is time that we discovered it.

Tasuni has been corrupted since the day he was born.

Maraketh tradition would have it that such a warped child be left upon the moonlit plain for the gods to adopt. Tasuni was not taken by the gods that night.

Such a thing has never happened before in our akhara. Now we know why.

Tasuni is a man caught between two worlds. Our world of light, and the Beast’s world of darkness. He is our scout in the black, and without him, Nightmare would remain beyond our understanding.

Dialla wishes the Beast dead. But why? Why would a nightmare wish to kill a nightmare?

A question of great interest, yet little importance. It does not matter why the sun rises and sets, as long as it continues to do so.

Dialla (after finding the Rapture Device)

Dialla said but one thing to me before descending into the Mines: “My love awaits.”

I know not why, but those three words frightened me more than any I have heard in my lifetime.

Dialla (after activating the Rapture Device)

Dialla’s hopes may be crushed, but ours still thrive… in you, Curse-breaker.

From what Tasuni tells me, the Beast’s innards are now yours to penetrate. Dialla has served her purpose. Now comes the time for you to serve yours.

Find this Malachai that Dialla mutters about so incessantly. If my understanding is true, then he is the mind of the Beast. Kill him, and the body of Nightmare will die with him.

Yes, Tasuni has informed me of Deshret’s existence within the Mines, but has been unable to tell me how she comes to be there. Another troubling hole in our knowledge of Nightmare.

Regardless of her origins, I will not risk my dekhara, in an attempt to free her. Even were she still flesh and blood, I would decide the same. She is our Sekhema no longer, and we have fulfilled our duty to her memory many times over. Kira will not agree, yet her revolt will rise only as words. I am her Sekhema and she will not cross me.

So, free Deshret if the opportunity arises. It is only right that she be allowed to return to the dust of the Vastiri, but it would be wrong if any should follow her there.

Thank you for doing Deshret so great an honour. Your great generosity shall be remembered.

Daresso? Yes, Petarus has spoken of him. The disturbing question is this:

How does a man who by all accounts, has been dead for over a hundred years end up as a Nightmare monarch in the bowels of Highgate?

Unlike Kaom, there is utterly no trace of his passing, and we have scouted every footstep of this mountain and its surrounds. There is no other entrance. No physical entrance.

Deshret, and now this… Daresso. Yes, most disturbing.