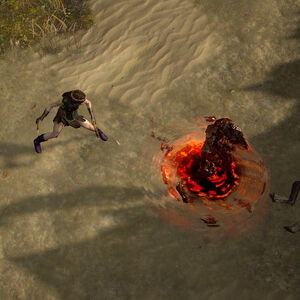 Raise Zombie is a spell that consumes a corpse to summon an allied zombie minion. Zombies attack using melee attacks and an area of effect slam.

The following base items are related to Zombies:

The following unique items are related to Zombies:

The following non-unique item mods are related to Zombie:

The following mods are related to Zombie and only able to drop from specific Delve node:

By default, the player can summon up to six zombies at a given time with a level 20 gem. This limit can be increased with certain passive skills or items.

has the implicit +1 to maximum number of Raised Zombies. It is possible to create talisman that have both the implicit and the drop-only Delve explicit, by using Jorgin's crafting bench. But since the game has more than one T1 talisman basetype, it is not guaranteed to do so.

Players can have a maximum of 18 (19 if using talisman ) zombies at once:

If you manage to raise the appropriate number of Zombies, you will be rewarded the following achievement: