View source
Scourge ArrowAttack, Projectile, Channelling, Chaos, Bow
Level: (1-20)
Cost: (4-5) Mana
Attack Speed: 190% of base
Attack Damage: (28-35)% of base
Effectiveness of Added Damage: (28-35)%Requires Level 28Channel to infuse an arrow with chaos, gaining stages while it is held. Release to fire it, leaving spore pods in its wake. Each spore pod blooms, firing thorn arrows, which travel for a short time before dissipating. Modifiers that cause additional projectiles to be fired will only apply to the initial arrows, and the spore pods will be split between those arrows.Per 1% Quality:1Superior2Anomalous3Divergent4Phantasmal1% increased Projectile SpeedEach Spore Pod fires 0.05 Thorn Arrows1% increased Damage1% chance to Poison on HitDeals (28-35)% of Base Attack Damage
5 maximum Stages
Each Spore Pod fires 9 Thorn Arrows
60% of Physical Damage Converted to Chaos Damage
Thorn Arrows deal 50% less Damage
150% more Damage with Hits and Ailments per Stage
(20-113) to (30-169) Added Chaos Damage
Arrows Pierce all TargetsPlace into an item socket of the right colour to gain this skill. Right click to remove from a socket. 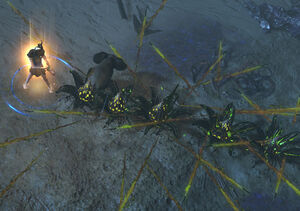 Scourge Arrow is a channelling bow attack skill. Channelling the skill charges up an arrow that creates spore pods as the arrow travels when released. The pods explode to fire thorn arrows around them. The arrow and pods deal physical damage converted to chaos damage.

) apply to the primary arrow, instead of the thorn arrows. Additional arrows cause spore pods to distribute evenly among each primary arrow, rather than in a line from player. Having more arrows than pods will not cause additional pods to spawn. Therefore at 5 stages Scourge Arrow will spawn 5 pods — if the player has 6 total arrows (5 additional) one of the arrows will not spawn a pod.

The distance between each spore pod can be increased by releasing the channel while mouse cursor is near the edge of your screen. With 4 additional arrows, the spore pods spawn in a cluster near your mouse cursor.

Ballista Totem SupportBallista Totem SupportBow, Projectile, Support, Totem
Icon: R
Level: (1-20)
Cost & Reservation Multiplier: 120%Requires Level 8Supports any bow or wand attack skill, causing it to summon a ballista totem that uses the skill for you.Per 1% Quality:1Superior2Anomalous3Divergent4Phantasmal1% increased Totem Placement speed1% increased Totem Duration1% increased Totem Range0.5% chance for Projectiles Fired by Supported Skills to ReturnSupported Skills will summon a Ballista Totem which uses that Skill
Totem lasts 8 seconds
Supported Skills deal (32-24)% less Damage
Attacks used by Totem have 50% less Attack Speed
Supported Skills have +2 to maximum number of Summoned Ballista Totems
Supported Attack Skills cannot be used with Melee WeaponsThis is a Support Gem. It does not grant a bonus to your character, but to skills in sockets connected to it. Place into an item socket connected to a socket containing the Active Skill Gem you wish to augment. Right click to remove from a socket.

, the totem will fully charge then shoot once, then follow it up with a low or uncharged shot, before attempting a full charge again, possibly based on its total attack speed.

Primary arrow collision: If a primary arrow disappears (e.g. because of collision with wall/obstacle) before all pods for that primary arrow are spawned, the rest of the pods will not spawn.

Point Blank interaction: The thorn arrows are all continuations of the original arrow from the character to the point the pods were placed. Therefore the distance travelled used for

Point BlankPoint Blank SupportProjectile, Attack, Support
Icon: b
Level: (1-20)
Cost & Reservation Multiplier: 110%Requires Level 18Supports projectile skills.Per 1% Quality:1Superior2Anomalous3DivergentSupported Skills deal 0.5% increased Projectile DamageSupported Skills have 2% chance to Knock Enemies Back with Hits at Close RangeProjectiles from Supported Skills Pierce all Targets within 1 unitsSupported Skills' Projectile Attack Hits deal up to 30% more Damage to targets at the start of their movement, dealing less Damage to targets as the projectile travels farther
Supported Skills deal (0-38)% increased Projectile DamageThis is a Support Gem. It does not grant a bonus to your character, but to skills in sockets connected to it. Place into an item socket connected to a socket containing the Active Skill Gem you wish to augment. Right click to remove from a socket.