Shavronne of Umbra is a unique monster located in The Harvest in act 4. 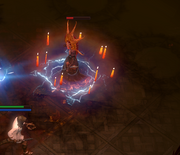 Defeating her is part of the quest Corpus Malachus.

is acquired after defeating her.

Shavronne is one of three subjects who hold a piece of Malachai's organs needed in order to gain entrance into The Black Core.

Begin the fight by waiting for Shavronne to make the first move. Often you will enter the fight and her first response will be to scatter several Storm Call beacons in the area. Avoid these and watch for her to start shooting explosive ball lightning rounds at you. She fires them in volleys of 3 and they move quickly.

While dodging the lightning balls check to see if she has her damage reflect aura up. The buff lasts for 3.5 seconds and reflects all Physical and Elemental damage back to you as lightning, making this the first full reflect aura in Wraeclast. After her first 3 round volley she can begin to use Lightning Warp to move around the map. This is usually while her Storm Call is going off so its easy to lose track of her or miss the Lightning Thorn reflect indicator.

Shavronne's reflect damage can make her the most lethal of the 3 enemies before Malachai.