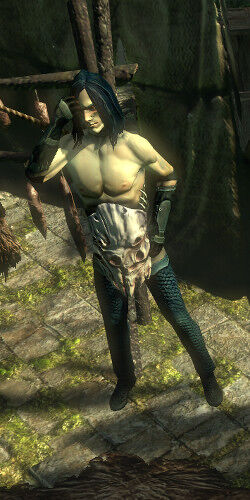 Claiming to be a great hunter (and proudly wearing some of his apparent trophies), Silk seems to be known more for his stories and songs instead. There seem to be various opinions as to their truthfulness, but it appears clear they are generally embellished at best, and improbable at worst.

Similarly to Greust, it is unclear what is Silk's exact role in the Encampment, but apparently his primary profession is hunting, and there is obviously a strong and tense rivarly (with mutual accusations of lies and cowardice) between them. However, he seems to greatly prefer less mundane activities instead, such as singing songs and telling stories - as Eramir puts it, Silk "would make a fine bard", and that the Encampment "would have nothing to fear with Silk among us", if a fraction of his stories were true.

He appears to be very sure of himself also in other matters ("females like to do things for Silk"). And while it can never be known whether his high opinion of himself is justified or how many of his stories are true, it appears there is sometimes at least a grain of truth in them, as can be seen in the quest Sharp and Cruel.

Yeena seems to hold a much more favourable view of him, however - claiming Silk observes and sees much more than he says, and that there is truth in his stories for those who listen carefully.

I learn the words, the ways of Oriath. You listen to me and not pig heads like Greust. Then you will live to find more new places.

Many exiles come this way. Eramir is not like them. Not like you. He is an old man with many stories. He teaches us words that you can understand. He teaches we Azmeri to be strong, not in our arms and legs like Greust. Strong in our heads.

I like Yeena. She thinks bigger than this place. She knows there is more to life than hunting and growing morcha. There is Spirit.

Greust is the big man in the tribe. All do what Greust says… but his spear goes limp when faced with the Eight-Legs.

I like this new Oriathan woman. She has new stories, not like Eramir who only speak of that which is dead and dust. Yes, I have many questions for this Helena.

Great White beast is dead? Then make a tale, a song to sing, of the mighty exile and their teacher, Silk the Wise. Many will be impressed, yes?

The pass to the sea is open? You are a legend that lives, exile!

I have climbed the great eight-leg web. I know the eight-legs like no other. This eight-leg, this Black Death, is one of the oldest and most fearsome eight-legs in all this land and beyond. To its shame, it was made pet, plaything, by the malicious master of this place. For years countless it grew in pain. Pain is all it knows, all it can understand, all it can give.

End Black Death’s pain, for all and once.

My great journey lead me to places of great power beyond even your stories, Great Dreamer. I am carried on legs and webs and shadows, that is all you can know for now.