From Path of Exile Wiki
Jump to: navigation, search
This page is about the boss. For the quest, see The Awakener of Worlds.

Sirus, Awakener of Worlds is the main antagonist of the Conquerors of the Atlas expansion. He acts as the final boss of the Atlas of Worlds, and the leader of the other conquerors: Al-Hezmin, the Hunter, Baran, the Crusader, Drox, the Warlord and Veritania, the Redeemer.

Sirus was the leader of the Elderslayers, and according to the game lore, disappeared along with The Elder after defeating him, much to the dismay of Zana, who grew attached to him during their time together. Once a hero, Sirus turned mad after defeating the Elder and then destroyed Oriath, forcing the player to eventually fight and defeat him. After defeating Sirus for the first time, the town of Oriath can no longer be accessed and is instead replaced with Karui Shores.

Unlike bosses like The Elder and The Shaper, a Sirus fight cannot be spawned using Map fragments. Instead players must chase the conquerors across the Atlas and defeat each conqueror many times before they are able to locate Sirus within the Atlas and spawn a Sirus fight. The portal to the Sirus arena is opened by Zana.

Sirus has various exclusive and high-value drops such as the

used for end-game crafting, and the

Hands of the High TemplarHands of the High Templar
Crusader GlovesQuality: +20%
Armour: (326-387)
Energy Shield: (64-76)Requires Level 66, 51 Str, 51 IntCan be modified while Corrupted
Can have up to 5 Implicit Modifiers while Item has this Modifier
(150-200)% increased Armour and Energy Shield
(7-12)% increased maximum Life
+(20-30)% to Fire and Lightning ResistancesThe laws of the faith do not apply to its leader.

, a versatile set of gloves that can have multiple powerful implicit mods.

Sirus is considered one of the toughest bosses in Path of Exile, as he deals massive amounts of damage of every type, including large amounts of Chaos damage. In order to defeat Sirus, players require decent amounts of life regeneration and at least 1 million DPS (damage per second). Many of the Sirus attacks are complex mechanics that must be dealt with and players cannot simply facetank Sirus, unlike many of the other bosses in the game.

The difficulty of a Sirus fight changes based on the player's current Atlas Awakening Level, and is colloquially known as A1 Sirus through A8 Sirus. If players wish to fight an easier Sirus battle, albiet with lower-tier drops, they may unsocket all watchstones from the Atlas, returning their Awakening Level to 0, and then open a portal to the Sirus arena.

The following is recommended:

The following is optional:

Tip: Sirus is highlighted in a green circle, and green arrows indicate the direction in which you have to run. Yellow lines indicate impassable walls.

Sirus will also have his projection attack the player occasionally (except in his last phase). 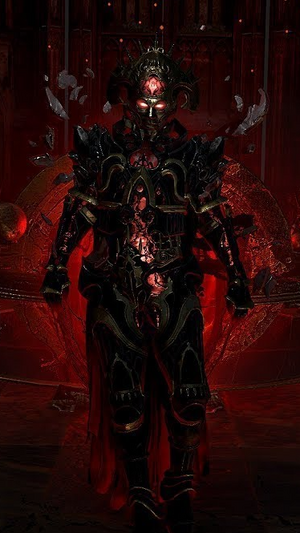 Shared with other Conquerors

Sirus, during the battle:

A fellow exile? One more fool under Zana's sway. Allow me to destroy you before she has a chance to betray you, too. At least my way will be quick.

There is nothing left for me here. For a few brief days, destroying something real may make me feel alive again.

You slew my friends. You brought ruin to my worlds. You have invaded my very sanctum. I should be furious, and yet... I feel nothing.

You want the Atlas? Take it. It's yours. But Oriath? Oriath I will burn to the ground. Perhaps the suffering of my fellow citizens will finally stir something.

No...Sirus is still alive? Gods, I thought he was dead! He took the brunt of the energy released when we sealed the Elder. How did he survive?

Sirus was the leader of the group of Exiles I recruited. Brilliant and determined, and a force to be reckoned with even before we travelled the Atlas together. We... grew close. I was distraught when he vanished with the Elder. At first i thought the other Exiles were looking for him as I was, but perhaps they knew he was still alive...

I have a terrible feeling that Sirus may be tied to the madness of the others. Or perhaps he is just as mad as they are. We need to find and stop him -- if the others are looking for a way out, I'm certain he is too.

My home... Our home... It's... it's just... gone. After everything it has been through, I still thought Oriath could recover, could become the place I always hoped it would be...

Now...? Now it's just ash. There's not even enough rubble left for us to scavenge through.

*sigh*... I'm sorry, Exile. I should be happy. I should be thanking you for your help. I should be focused on the future. But I don't even know where to begin. Oriath, and the people who were in it, are scattered to the wind. We'll just... keep going, I suppose. What else can we do? Perhaps we can settle here... Stay in one place for a change.