From Path of Exile Wiki
Jump to: navigation, search
Buff

The snowstorm protects you. You have a chance to dodge attacks and spells while in it. 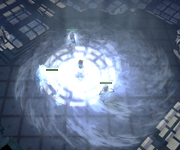 Shown is the Area of Effect of overlapping Snow Cloak vortexes, compared to the tiles of the Luxurious Hideout.

Snow Cloak is a buff, cast by They of Tul for its allies.

When They of Tul is raised as a spectre via the

skill gem, or converted temporarily via

Conversion TrapConversion TrapTrap, Spell, Duration
Cost: (6-23) Mana
Can Store 3 Use(s)
Cooldown Time: 8.00 sec
Cast Time: 1.00 secRequires Level 4Throws a trap that, when triggered by an enemy, converts that enemy to your side for a short duration. Does not affect unique monsters or players.Per 1% Quality:1Superior2Anomalous3Divergent1% increased Skill Effect DurationConverted Enemies have 1% chance to Taunt on HitConverted Enemies deal 20% increased DamageTrap lasts 4 seconds
Base duration is (5.3-10) seconds
Traps do not Trigger at the end of their DurationPlace into an item socket of the right colour to gain this skill. Right click to remove from a socket.

, the player character and other allies gain additional chance to dodge attack and spell hits, while in the Area of Effect of Snow Cloak.

The internal id of the monster skill is "BreachBlizzard". The id of spectred version is BreachBlizzardSpectre.

Tul, Creeping Avalanche uses an enhanced version of the skill (id: BreachBlizzardBoss) which applies the buff to herself and her minions.

This only applies to the monster version, not the spectre version