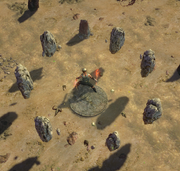 A stone altar in The Ledge

In the Talisman leagues, Stone Altars could be found throughout Wraeclast. At these altars, the player could sacrifice sets of five different talismans of the same tier to summon a monster possessed by a higher-tier Talisman. The rarity of the output Talisman was selected at random from the five input ones (i.e. if the player puts three magic, one unique and one normal talisman into the stone altar, the resulting talisman will have 60% chance to be magic, 20% chance to be unique and 20% chance to be normal).

If the player used five third-tier Talismans at a stone altar, it summoned a portal to an area where Rigwald, the Wolven King could be fought.

After the Talisman league ended, Stone Altars were not added to the core game. Currently they are not implemented but may make a return in the future.[1]

When a stone altar was activated with tier 1 or 2 talismans, groups of monsters would appear from among the following: