From Path of Exile Wiki
Jump to: navigation, search
Storm CallSpell, AoE, Duration, Lightning
Mana Cost: (6-16)
Cast Time: 0.50 sec
Critical Strike Chance: 6.00%
Effectiveness of Added Damage: 130%Requires Level 12Sets a marker at a location. After a short duration, lightning strikes the marker, dealing damage around it. When this happens, it will also set off the lightning at any other markers you've cast.Per 1% Quality:1Superior2Anomalous3Divergent4Phantasmal0.5% increased Area of Effect2% increased Area of Effect
2% reduced Cast Speed0.5% reduced Skill Effect Duration0.25% chance for Lightning to Strike the Marker when CastDeals (21-510) to (38-947) Lightning Damage
Base duration is 1.5 seconds
(10-29)% increased Effect of Lightning Ailments
+(0-6) to radiusPlace into an item socket of the right colour to gain this skill. Right click to remove from a socket. 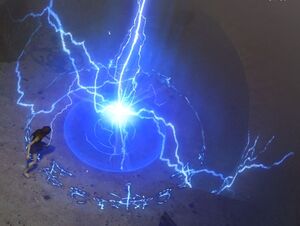 Storm Call is a spell skill that sets a marker at a location, and after a short duration, the location, as well as the other markers you've placed, are struck with AoE lightning.

The skill increases radius when level up. However, there is no info in-game to indicate the initial radius of the skill at level 1.