Apparently this item has been renamed to Victario's Flight between patches 2.0.0 and 2.0.0g, most likely 2.0.0. Unfortunately I sold the item before seeing the new flavour text. —The preceding unsigned comment was added by MephySix (talk • contribs) 22:05, 24 July 2015 (UTC)

On the page, the MS buff for the user in the item's tooltip says 10%, but in-game it's 15%. I'd change it if I knew how, but unfortunately I just made the account and I'm still figuring it out. Can someone confirm the x% Movement Speed isn't a range, and is in fact static? 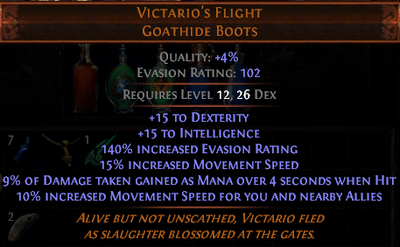 —The preceding unsigned comment was added by KumaYukiteru (talk • contribs)

Temporary fix for now. Would you mind checking what the sell price from the vendor is? There might be a separate mod that actually adds the missing 5%. --Illviljan (talk) 16:32, 23 June 2018 (UTC)

It's definitely a hidden modifier, the boots are selling for 14 alt and 8 alch shards, 5 more alt than the boots would sell for normally. Thanks for clearing everything up! KumaYukiteru (talk) 18:38, 23 June 2018 (UTC)

What Movement Speed it has?

At the Character pane, under Defence tab, in the "Movement Speed modifier" line:

So, how much is the designed Movement Speed of this boot?
Do match the planned, the real (experienced), the tooltip-shown, the Character-stat-shown, the wiki-shown Movement Speed values?
(They do not seem to, for me.)