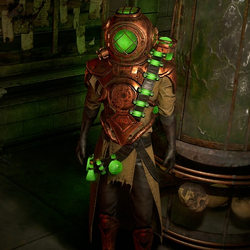 Tane Octavius is an NPC that was introduced in Metamorph league. He can be found in maps. Once you complete your first Metamorph encounter (the

Pound of Flesh quest), he will show up in the Epilogue towns and can be invited to your hideout and he will allow the player to access Tane's Laboratory.

Come no closer, unless you wish to experience what my vials contain firsthand. I am Tane, a freedman, and I plan to stay that way.

Trust is not given freely, Exile. It must be earned, and you have not earned mine yet. But I do have something to give you. An opportunity.

Slow progress is still progress. Do not lose sight of what we work towards.

My master called Alchemy the science of turning learned men to fools. Every half-wit with an alembic would try to turn lead to gold, or formulate an elixir of eternal youth, and Master Lucan was no different. But men like him rarely saw the magic in alchemy up close -- the sudden bubbling of a liquid, the heat growing in your hands, the vibrant colours and foul odours. Much knowledge is lost at a safe distance.

In truth, the power of Alchemy is not in turning one thing into another, or creating miracles. It is in isolating and extracting. It is about finding purity within the confusion.

In Oriath I served a man named Lucan Octavius; a wealthy alchemist of high-status. I call him my master, for I was both his apprentice and his slave. Lucan's work required handling extremely dangerous, often very hot, materials. Not the sort of thing becoming of a man of stature. So it came to be that a slave like myself learned the nuances of the alchemical arts firsthand.

As for Lucan, he was... not the man he portrayed himself to be. He was more dangerous, more explosive, and more unstable than any material I had to handle. In public, he was fatherly and genial. In his home, he was violent and lustful.

I do not regret what happened to him; only the part I played.

How many innocent men and women can you think of who were exiled? We are here because we are violent, because we broke the laws of the land.

I killed my master. I do not regret that he is dead, only that it was by my hand. My master was a sick man, with dark proclivities. A sickness of the mind that no alchemy could hope to cure. And he passed that sickness onto me.

I was never violent until that day. Until that day, I could not fathom how one man could take the life of another. But Lucan drew out of me an anger I did not know I was capable of experiencing. It overcame me. Forced me out of my own body. And by the time I was in control again, my master was dead.

That anger, that darkness is still in me, Exile. And that is why we are here.

The task I have given you is dangerous. To face the cruelty that dwells in the living, distilled and manifested, is not a task I wish upon anyone. Yet it is what I have asked of you. So you may be asking yourself, for what purpose do I seek to isolate this darkness?

I once thought it was a symptom of the corruption that pervades Wraeclast, but now, now I believe it to be something more primeval and universal. An element of our very beings hitherto unknown. To better understand it is to better understand life as a whole. Is that not enough?

Very well. There is more to this story, but it may take some time.

To conjure a creature of darkness we use the flesh of the dead. We destroy that flesh, and draw out the ill-will that inhabits it, giving it form. My hope is that, one day, we may do the reverse -- destroy the darkness while leaving the flesh unharmed.

To that end, I've acquired a rare ichor -- there's no other like it in this world. The very essence of a human; for all intents and purposes, its soul. This individual was cruel beyond measure, or so I've heard, though not incapable of kindness. This ichor is robust enough that it might be injected into an entity of equally cruel temperament, and may be given new life.

Now, imagine if we could then destroy the darkness. Could this cruel soul be purified? Could it be brought back, not only from the dead, but from the precipice of damnation?

That is my true goal.

My master was no stranger to the machinations of the Templar elite like her. I feel a sort of kinship with her. We both gave up our names, though she did so voluntarily. We both sought to make something of ourselves. Where our kinship ends is how she made her name known. I can appreciate the desire for knowledge but, I can never condone the methods used to acquire it.

If it is true that, in her dying moment, she sought to redeem herself, it casts an interesting light on our exploration of the darkness. Perhaps it is our very mortality that drives us to do good, to suppress the primal urges... Our actions outlive us, after all.

Keep your distance from her, exile. One horrible night, my master flew into a great wrath and beat me to the precipice of death itself. For a moment, I envisioned myself walking through strange grey halls.

She was there, watching me, unblinking, a herald for something far greater...

She was there. She spoke. She said that joining the Halls of the Dead was not my fate that night, but that we would meet again. These are the faded memories of a terrified and traumatized child, perhaps no more than a foolish nightmare, but I cannot stop myself from shivering when she turns her purple eyes my way... because I can tell that she recognises me.

Though I know little of my natural heritage, I know enough to understand the implications of your victory against the Karui God of War. Did his long slumber weaken him, or have the gods been greatly exaggerated through the evolution of myths? In either case, this undoubtedly means we will find no divine help against the intrinsic darkness. They are not the keepers of mankind many believed them to be.

Do you see now what we face, Oriathan? That was what slept within the creatures just near here. What darkness sleeps within me? Or within you? And if we can draw out that darkness, might we then be able to draw out that which makes us... us?

Think on this, when we next meet, we shall begin to seek the answer.

Welcome, Exile. This manor, and the contents within it, once belonged to Master Lucan. It was here, in this laboratory, that he met his fate, and I met mine.

It seems that in the wake of Kitava's rise, the rest of his family fared no better. Forgive me if I do not grieve for the family's fate. Our relationship was... complicated.

If there is a silver lining to be found from Kitava's destruction of Oriath, it is that with access to this lab, we may be somewhat more ambitious with our tests.

Though there is much left to discover from the dwellers of Wraeclast and Oriath, I wish to test my hypothesis that the darkness is not simply a property of where we live.

I've heard rumour that there may be a way to experience... other places. I am no expert in such matters, but if you plan on such a journey, I would ask that you continue to seek out suitable samples. And if you find some which possess the darkness in great quantities, well all the better.

Without this lab, I'd be wary about releasing such entities into the wild. Here, they can be contained, if not controlled.

...and that's just the beginning. I'll never tire of watching them slaughter you. I hope you can feel every cut. Every burn. I hope it haunts every moment of your pathetic existence.

...it kills you to see me free, doesn't it? It kills you to know you have no power over me any more. I'm in control of both of our destinies.

...and what's left of your legacy? Nothing but a few stains on the floor. All your work was for nothing, and I couldn't be happier about it.

The 3D model of Tane is similar to the humanoid monsters of Heist, such as Senior Necroscientist in Laboratory tileset.