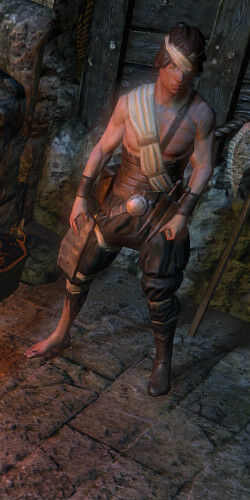 "Still alive are we?"

"Stay sharp out there."

Tarkleigh has taken it upon himself to be the de facto 'father of the brood' to Nessa's 'mother'. He is a former jack of all trades who has washed up on Wraeclast and found a new selfless focus in his mission to help new exiles arriving at Lioneye's Watch.

His feelings for Nessa seem to go deeper than he lets on.

Fine work with Hillock. Where'd you learn to fight like that? No, forget I asked. We exiles have no history. Dominus took it from us when he had his Blackguards dump us in the water out there.

Founded by Marceus Lioneye as a supply station for his campaigns against the Karui. In its day, Lioneye’s Watch could be defended by just a small garrison of well-armed legionnaires.

What have I got? A handful of starving criminals with driftwood clubs and rusted hatchets.

The Eternal Empire has some right nasty leftovers. Whether it's something in the air or in the water, no one stays dead in Wraeclast... not the first time. Can take a little while, but sooner or later corpses wake up and go looking for breakfast.

Rhoas? Overgrown chickens with a murderous streak. If you’re not careful, they’ll talon your guts out and snap them up like big, fat worms.

That said, be sure to rifle through their nests if you get the chance. Rhoas are like magpies, attracted to what shines.

Though they might look like you or I, behind those eyes there’s nothing but darkness and hunger. Whatever’s got inside those folks… is not even close to being human.

That hat Bestel wears? Saw him pluck it from the real captain’s head, right before the cannibals barbequed the poor bastard. Waste not want not, I suppose.

Yes, Bestel’s got a gift for telling tales but I’d never call him a liar. The truth’s always in there. You just have to listen for it.

If you have to quench your curiosity about Merveil, go look at the corsairs that haunt the grave of ships. Like any mother, Merveil’s got hungry mouths to feed.

Damn me! I didn’t think it possible. All these souls Merveil and her brood have consumed over the years… you’ve done right by those that are dead, and by those who still might live.

Nessa’s the one keeps the rest of us from losing our minds. To be honest, when she first arrived, I didn’t think she’d survive more than a day, two at most. She’s been proving me wrong every dawn since.

Heard a bard once sing that “the fairest flowers bloom in the foulest places”. He was bloody well right.

You found a way to bring down Shavronne’s Barricde? It’s at times like these I recall I’m a man of action, not words. Should we encounter each other in the forest, the roast boar’s on me, my friend.

There’s many a way to die in Wraeclast. Most of them are mercifully quick. But you get caught alive by the goatmen, you’ll wish by any god you belive in that you hadn’t.

I’ve heard some of the more superstitious exiles say there’s a deity these goatmen worship. Abberath, Eater of Agony. Sounds like a right bastard, if you ask me. So if the goatmen hand you an invitation to go have dinner with their god, tell them where to stick it.

I’ve seen many an exile pass through Lioneye’s Watch. And many more that simply pass on. Those letters are my way of keeping track… of remembering.

Oriath might want to forget us all, but I’ll be damned if I will.

That medicine chest you found, it’ll do more than you might think. The medicine will run out, it always does. But Nessa won’t. Give that girl a sliver of  hope and she’ll carry it to the end of the world.

The scavengers? Orphans of the Eternal Empire who've forgotten what it's like to be civilized. Especially the likes of Fire Fury and Hailrake... they make the undead look like responsible citizens.

And you know why the scavengers aren't banging on our gates right now? Too busy killing and cooking each other. It's a 'man eat man' world out there.

Piety's cut us off from the interior? That's bloody troubling news.

I’ve travelled inland, on the Emperor’s Road via the Prisoner’s Gate. Had to skirt around Axiom Prison...that’s the holdfast of Brutus, the Warden. Bloody treacherous trip, it was.

Worth it? There’s forest inland. Game, berries, fruit...more food than we can scrounge here.

But most here wouldn’t survive the journey, Would be a damn sight easier if we could pass through the Prison. Tell you what...you carve us a path up the coast, find us a way past or through Brutus, and you’ll have more than a few lives owing to you.

First we hear that Oriath has lost its bloody mind and then you turn up. Doesn’t take a scholar to work out how those two events might be connected.

I don’t know what’s going on out there, and I probably wouldn’t understand it even if I saw it with my own two eyes. What I do know is this. The world we knew… it’s gone. Now we have to do our damndest to make sure we don’t go with it.

If Nessa thinks you can use that old rag of a banner to rustle up a phantom ship, who am I to argue? I don’t need to understand how she comes back to us, only that she can.

I wonder how much Lilly squeezed out of those refugees from Oriath. Yes, she did risk her life and ship to save them, but I knew the Lilly of old. A damn fine smuggler, and that Lilly never committed a good deed without a good profit.

I had a life before Lioneye’s Watch. Not much of one by some people’s standards, but it was good enough for me.

Lilly and I, we’d smuggle a bit of booze to keep our purses full. We were good at it too. Made us a fine partnership, her quick mind and my steady nerves, right up until the day she left me drunk and trussed on Penance Quay. By the time the Blackguards unwrapped their present, she was halfway to Trarthus.

That’s how I ended up here. Yes, it smarts a bit to look at her, but what right have I to say where the flotsam finally washes up?

Never took much stock in the stories Lilly told. Didn’t sit right, those full moon sacrifices her and her ilk would do out on the open water. But now, in light of everything, I’m obliged to reconsider.

If it meant Nessa might be spared the attentions of that wretched Brine King. I’d even be inclined to slit a mutineering throat or two myself.

Seems Tukohama’s raised up a host out of whatever afterlife the Karui believe in. I feel for those poor bastards, if I’m to be honest. The Karui haven’t had an easy history. Colonised, enslaved, used as pawns in many a war, and now abused in death by their own bloody god.

This is why I don’t follow any deity. They’re all as bad as each other.

Axiom Prison has been fairly quiet since you saw fit to retire its warden. Afraid that’s no longer the case.

Shavronne of Umbra, the very witch that made Brutus the man he was. I don’t know if she’s a ghost, a ghoul or some other death-scorning creature I’ve never heard of, but she’s up there, tinkering away with her black arts and twisting nature around her bony old fingers.

Honestly, I don’t care why she’s come back or what cruelty she’s brewing up there. She’s a boil that needs lancing before the infection spreads.

Those shambling ‘nobles’ out there on the strand? They left Oriath to die a bloody death. Rats fleeing a sinking ship. Seems they learned a bit of a hard truth though. Doesn’t matter how much money you have, you can’t outrun death when it comes for you.