View source
This page is about the divine creature. For the divination card of the same name, see 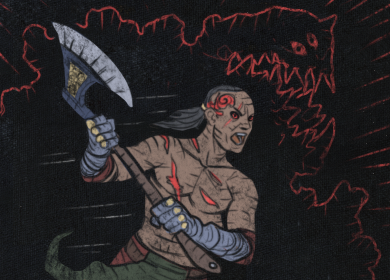 Belly of the Beast

It would not be a stretch of reason to consider the Beast the source of all malformation in Wraeclast.

The Beast, Nightmare or Darkness is the name given by the people of Wraeclast to the ancient divine creature that is the source of all Thaumaturgy. Piety described the Beast as "the one power in this world that transforms 'what is real' into 'what is imagined'". It lives inside the mountain nearby the town of Highgate and is large enough for the player to enter it and walk through its belly and brains (the Belly of the Beast Level 1, the Belly of the Beast Level 2 and the Harvest), after the Rapture Device has created an entrance.

The Beast possesses corrupting powers, devouring the souls of his prey and mutating whoever comes in contact with it. Those consumed become a part of the creature, existing forevermore as a thrall of twisted nightmare[1]. Queen Atziri and High Templar Dominus were tapping into the Beast's powers to realize their ambitions. Malachai, The Nightmare initially wanted to destroy or tame the Beast and use its power to reshape the world, but did not manage to control it. Instead, he entered the Beast's Black Core and became the Beast's servant.

As revealed in Act 6, The Beast was created and raised by Sin in order to suppress the gods, keeping their divine powers in check and thus preventing further strife between divine beings. The power of The Beast kept the gods asleep, but it also drew the attention of many power-seeking mortals throughout Wraeclast's history. According to Sin, The Beast itself has no will or ambition of its own, which is what allowed individuals such as Malachai to tap into its power for their own twisted purposes. Following the actions of the player in Act 4 and the demise of The Beast, the old Gods (such as Kitava) are awakened, setting in motion the events of Part 2.

The actual name of the Beast is unknown, although Tasuni claims that Malachai knew its true name.