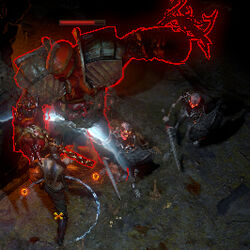 The Cage is a normal difficulty area in Descent: Champions. This area is entered from either The Haunted Dungeon, The Burning Cave, The Obelisks of Faith or The Chamber of Greed and exits to The Necromantic Crypt.

Note: Unlike Brutus, The Brute does not spawn large numbers of various skeletons and does not use ground spikes.